Home / Behavioral Health / I love you, man: ‘Bromances’ may be good for men’s health

I love you, man: ‘Bromances’ may be good for men’s health 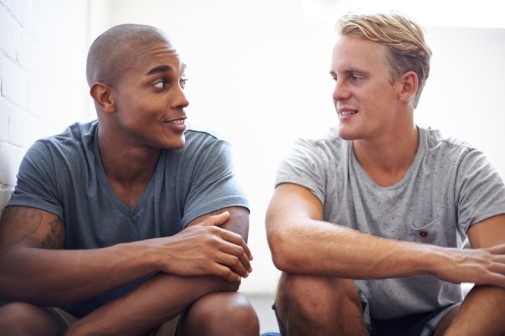 Bromances can have a positive effect on men’s health, according to a new study.

Researchers at the University of California, Berkley found that close but nonsexual friendships between two men, known as bromances, have similar health benefits as romantic relationships, especially when it comes to dealing with stress.

The study observed male rats kept in the same cage and found that mild stresses made them bond and cooperate more than they would in a less stressful environment. After minor stresses were applied, the rats ended up showing higher levels of oxytocin, which led to an increase in huddling and touching.

Social interactions raise the level of the hormone oxytocin in the brain, which help people to bond and socialize more, decreasing their stress and leading to longer, healthier lives.

“Having friends is not un-masculine,” said lead author Elizabeth Kirby, who started work on the study as a doctoral student at UC Berkeley and continued it after assuming a postdoctoral fellowship at Stanford.

The results of this experiment show the importance of male friendships to mental health and coping with stress. Through the experiment, researchers learned that stress can be a vehicle for social bonding, which can improve mental health and lead to happiness.

A bromance’s positive impact isn’t limited to adults. Male-bonding can serve as an important part of a child’s development as well.

“I think there is a hidden message here for helicopter parents: don’t try to protect your children from every bit of stress coming their way,” says Dr. Chandragupta Vedak, a psychiatrist at Advocate Good Shepherd Hospital in Barrington, Ill. “Let children deal with it through their bromantic relationships because as these studies have shown, moderate stress primes the brain to better deal with subsequent stress.”

← Why your kid’s football helmet better fit
Movin’ and Improvin’: Our journey to get fit by 40 →