Home / Repurposed Story / What does your sweat say about you?

What does your sweat say about you? 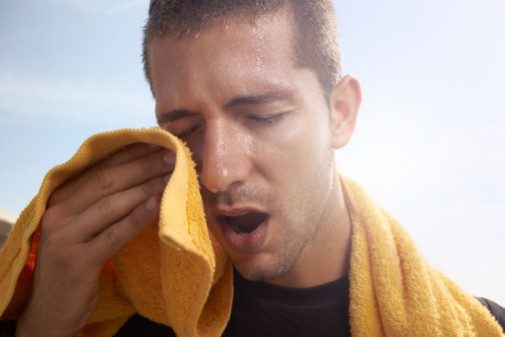 Sweat does a lot more than make a person smelly; it can convey happiness, according to one study.

The research, published in Psychological Science, concluded that emotions can be shared with others through a person’s sweat.

Researchers from the Netherlands had men provide a sweat sample after watching a video clip intended to create a happy, neutral or fearful emotional state. Women were then exposed to the various sweat samples and their facial expressions were analyzed.

The researchers say the findings suggest a “behavioral synchronization” between the sender (the sweat donor) and receiver (the sweat smeller).

“This research is really interesting, as it shows that if you’re feeling happy while sweating, you can unknowingly communicate these feelings with those around you,” says Dr. Philip Favia, family medicine physician at Advocate Good Shepherd Hospital in Barrington, Ill. “As we know, research shows working out creates endorphins to make people happy. Hopefully the positive feeling one experiences when working out can be communicated through your sweat and encourage others to work out as well.”

“Our study shows that being exposed to sweat produced under happiness induces a simulacrum of happiness in receivers and induces a contagion of the emotional state,” said Gün Semin, senior researcher and psychological scientist at Utrecht University in the Netherlands, in a statement. “This suggests that somebody who is happy will infuse others in their vicinity with happiness. In a way, happiness sweat is somewhat like smiling — it is infectious.”

← Should you take anti-inflammatories before a workout?
Childhood obesity and a warning for celebrities →