Home / Diet & Nutrition / Did you know this is one of the most versatile vegetables?

Did you know this is one of the most versatile vegetables? 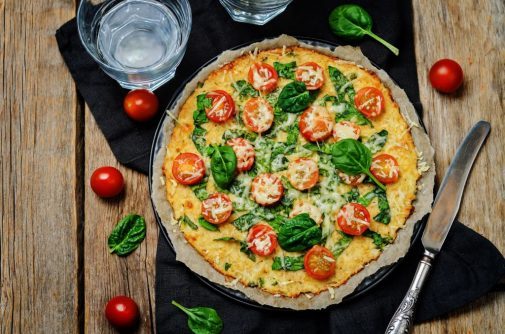 Many people don’t enjoy cauliflower for three reasons: its lack of taste, peculiar smell and white color. But did you know that cauliflower is one of the most versatile vegetables that you can consume, and for that reason, does not have to be consumed the way you remember as a child (boiled)?

In fact, cauliflower can be used in so many ways; it can even be used to make a pizza crust, which has become my family’s standard way to make pizza. Why? Because my family lives a low starchy carb lifestyle, and we have learned many creative ways to enjoy the foods we love using low starchy carb ingredients. Cauliflower provides an alternative to foods like rice, mashed potatoes, tater tots, soup and so many others. But don’t be fooled by its color. While many people may not associate cauliflower with the same nutrient richness as its fellow green cruciferous vegetables like broccoli or kale, it holds up very well when compared to the competition.

The other problem for many has been the slight odor this versatile vegetable has, but the odor actually explains why this vegetable is such a healthy option for diet. So what is the smell all about?

It has to do with the sulfur content, which explains many of cauliflower’s most important health benefits, as you will see.

Who benefits the most?

Boiling cauliflower in water leads to removal of many of its phytonutrients in the water. This is great news, since many of us learned to dislike cauliflower when it was prepared this way. When steamed instead, the phytonutrients glucosinolates (contains sulfur) and flavonoids are better preserved. Glucosinolates have cardiovascular, digestive, immune, inflammatory and detoxification benefits.

Studies have shown the cooking of raw cauliflower significantly improves its ability to bind together with bile acids. This is important because bile acid binding is a well-documented method for helping with the process of regulating blood cholesterol levels, leading to potential cardiovascular benefits from cooking cauliflower.

Studies revealed that when cauliflower is consumed at least once per week, it is associated with decreased risk of colorectal cancer and has been shown to be associated with a greater decrease in risk than broccoli. In terms of prostate cancer risk, cauliflower and broccoli have shown a similar ability to decrease the risk of the second-leading cause of cancer in men.

Both ways of eating cauliflower are beneficial, so enjoy them any way you like to prepare them. Although there can be the loss of water-soluble nutrients during cooking with water or other liquids, there can also be increased bio-availability from the freeing up of nutrients that remain inside the cells in raw cauliflower and are released from those cells during cooking due to the breakdown of cell walls.

Creative ways to use cauliflower:

You are a Google or YouTube search away from many great ways to prepare cauliflower. Simply use your imagination and give it a try. You will be surprised how good this healthy, low-carb alternative to starchy carbs will taste:

For those who have experienced this great vegetable, share creative ways you have enjoyed it. For those who have not, remember my motto: Be open to changing old beliefs to new ones that better serve you. You have to give some of these creative ideas a try. You won’t be disappointed.

← Are first-borns the smartest sibling?
Rates of this condition triple previous estimates →

Dr. Tony Hampton, MBA, CPE is Board Certified in Obesity Medicine and Family Medicine. He currently is the physician lead for Advocate's Healthy Living Program as well as Regional Medical Director for the South Region of Advocate's Medical Group. He is an inspirational public speaker, blogger, coach, and has authored a book entitled Fix Your Diet, Fix Your Diabetes. He has led multiple programs and works with AdvocateAurora to coach patients on their journey to achieve their health care goals by balancing nutrition, exercise, stress reduction, increased sleep, and needed medical interventions. He believes that a shift is needed in healthcare where we all work together focus on prevention and wellness. He is married and a father of two college-aged boys.