Home / Heart care / I didn’t have a heart attack, but I prevented one

I didn’t have a heart attack, but I prevented one 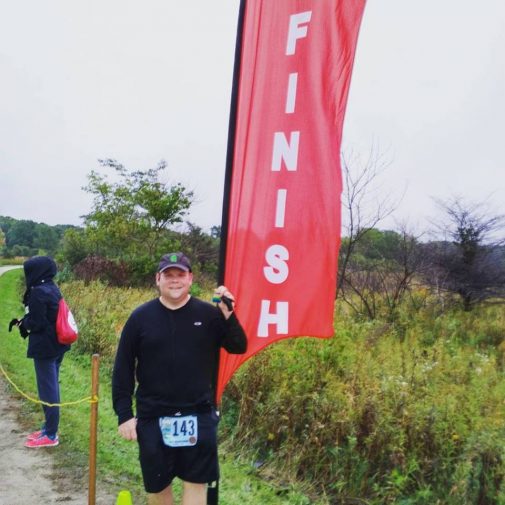 I wasn’t blessed in the genetic lottery.

Both of my parents died young from heart-related issues. Being married with three boys, it was a wake-up call for me a few years ago to watch my mom slowly go downhill and pass away. I started exercising somewhat consistently and trying to eat healthier foods. I even had a sleep study done and was treated for sleep apnea. All in all, my health seemed to be holding steady.

I had been jogging somewhat regularly, but last summer, I really got into it and started training for a half-marathon. I ran all summer using a training program, and on Oct. 1, 2016, I finished my first half-marathon in just under three hours. I was thrilled and excited to have accomplished that.

Because I had been able to do that without any signs of cardiac distress, I felt my heart had to be in pretty good shape. I visited my doctor regularly, strictly followed his advice on controlling my high blood pressure and worked to control my high cholesterol through diet and exercise, but I still struggled with weight loss.

Earlier this year, I saw an advertisement for a $49 heart CT scan through Advocate Health Care, which is the medical group I’m in. I figured that for $49, it would give me some peace of mind to know everything was OK, or, if something was wrong, we could nip it in the bud.

In the weeks leading up to my scan, I began to notice some slight left shoulder discomfort that would come and go. I talked to my doctor about it, and I even made an appointment for a check-up, but we came to a mutual conclusion that if I could run a couple miles without obvious signs of cardiac distress, the discomfort was probably muscular and not related to my heart.

Fast forward to March. I went in on a Tuesday for my CT scan. It went quickly, the technician was great and I went on my merry way. But later that afternoon, my doctor called and said he wanted to see me in his office that afternoon. It wasn’t optional.

It turned out I had a very high calcium scoring, which opens the door for a high possibility of atherosclerosis, a disease in which plaque builds up inside the arteries. It can lead to serious problems, including heart attack, stroke or even death. We scheduled a cardiologist visit for two days later, and my doctor told me to go home and take it easy until then.

The next day, I began to notice the left shoulder discomfort again, and it was more persistent than usual. That afternoon, I finally called my doctor, and he told me to go straight to the emergency department to have it checked.

I spent a couple nights in the hospital, during which time I had an echocardiogram stress test that revealed an abnormality in my heart function during exercise. This led to an angiogram, which revealed an 80 percent blockage in my left anterior descending (LAD) artery. I had a stent procedure at Advocate Good Shepherd Hospital in Barrington, Ill., and now I’m feeling much better. To be clear, I didn’t actually have a heart attack but successfully prevented one.

I share all this because I’m only 39 years old. While this was going on, I heard repeatedly from the doctors how young people usually don’t take heart matters this seriously. That’s my reason for sharing this. It’s to encourage people my age to take their heart seriously.

I’m glad I went for the scan. I want to be around to see my kids graduate, get married, and hopefully make me a grandfather one day.

If you have a family history of cardiac disease, get your heart checked out. Work with your doctor. Don’t become another statistic.

← Should younger men be screened for prostate cancer?
Pee problems: When it’s time to see the doctor →

John Vincent has spent his 39 years in the northwest suburbs of Chicago. He has a wife, Christy, and three sons, Jared, Casey and Bradley. He spends his days working in education IT.