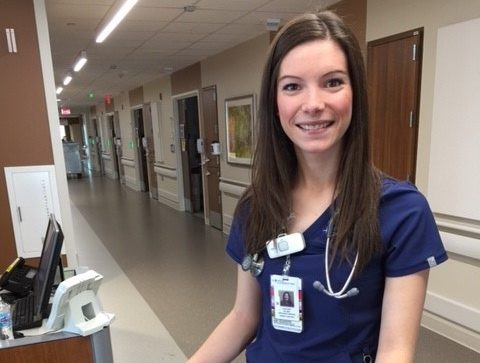 When Advocate Good Shepherd Hospital nurse Courtney Minner was a patient care technician, she cared for a woman who was transitioning to hospice after failed chemotherapy treatment. She became close with her patient’s family, supporting them as they struggled with their loved one’s decline.

Later that year, Courtney returned to school at Bradley University. There, she happened to see her patient’s son, also a student at the school. He said his mother had died but that Courtney’s compassion made a difference during her last few weeks. His gratitude cemented Courtney’s belief that she had chosen the right vocation.

“I felt confident and inspired for my future career as a nurse,” says Courtney, who graduated from Bradley with a bachelor’s degree in nursing in 2015 and was hired as a registered nurse in Good Shepherd’s Clinical Resource Unit in August of that year.

It seems fitting that Courtney is working at Good Shepherd. She was born at the Barrington hospital in 1992.

Her Barrington roots run deep. Three generations of her family have lived in Barrington, and she volunteered at Journey Care Hospice in the community when she was younger.

“I realized I wanted to go into the profession of helping people through health care,” she says, adding that a medical mission trip to Nicaragua further fueled her passion to care for others.

By the time she graduated from Barrington High School, Courtney’s sights were firmly set on Bradley University’s nursing program. She applied for and was awarded an Advocate Good Shepherd Hospital Auxiliary Scholarship.

Eager to pursue all health care opportunities, Courtney applied for Good Shepherd’s internship program for college students earning nursing degrees. She was one of seven summer interns in the Student Technician Assistant to the RN (STAR) Program, then was hired as a patient care tech to work while home from college on breaks.

Although she has been a nurse at Good Shepherd for less than two years, she has stepped up to serve as co-chair of the Clinical Resource Unit Shared Governance, a High Reliability coach, the team lead for the Nursing Transitions Team and a clinical coach who teaches new nurses. She also serves on the hospital’s Patient Experience Committee and Hand Hygiene Committee.

As a nurse in Good Shepherd’s Clinical Resource Unit, Courtney works on various floors, which suits her just fine.

“I love going everywhere in the hospital,” Courtney says. “It’s such a tight-knit group here. I feel like I have family on every floor.”