A massive heart attack unites basketball players for a common cause 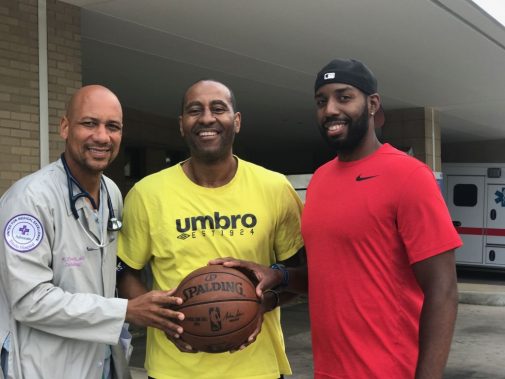 For the past 30 years, retired Chicago Public School teacher Elston Harris, 53, has championed a well-known basketball mentoring program for youths on Chicago’s South Side.

This program, known as the Weekend Warriors, is one of the city’s hidden gems, which regularly attracts NBA legends and current players, Hollywood celebrities, local personalities and famous politicians looking for comradery, positive role models and an exciting game of basketball.

On June 23, 2017, however, the driving force behind this group nearly came to a halt when Harris suffered a massive heart attack on the court, after playing in the final game of the day.

CPR to the Rescue

“Mr. Harris is very lucky to be alive. The only reason he survived is because Officer Jones knew CPR and had the presence of mind to keep chest compressions going until paramedics arrived with more sophisticated equipment,” says Dr. Marlon Everett, a cardiologist at Advocate Trinity Hospital in Chicago.

Harris suffered a heart attack immediately following the pick-up basketball game. When he fell to the ground, several players believed he had either fainted or tripped and twisted his ankle. But Jones knew better.

“I knew it wasn’t a twisted ankle. When I heard him hit the floor, it was like dead weight. It wasn’t a controlled fall,” Jones explains.

Relying on instruction he received during his Police Academy training in 2010, Officer Jones started chest compressions immediately. He administered chest compressions continuously for approximately 10 minutes until an ambulance arrived and transported Harris to Advocate Trinity Hospital. There he received heart stent surgery, which removed a 100 percent blockage of a coronary artery, and landed Harris under Dr. Everett’s care.

At the onset of his heart attack, Harris remembers “feeling a little warm,” then fighting to get up from his fall. “In my mind, I felt like I was in a room…like I was dreaming and I couldn’t get out,” he says.

Although heart disease runs in his family, Harris believed he was safe from heart troubles because he exercised three times a week, avoided eating red meat and ate a diet consisting mainly of vegetables, chicken and fish, with the exception of a frequent indulgence in French fries.

Harris ignored warning signs that a heart attack was in his near future – in Harris’ case, a mild shortness of breath and three months of unexplained indigestion. “You make any excuse in the world not to see the doctor. That’s what men do. There’s a lesson behind that,” Harris says.

The first lesson, according to Dr. Everett, is to see your doctor annually and whenever you notice small changes in your health. “We all know that eating a healthy diet, maintaining a healthy weight and not smoking are important to our heart health. But knowing where you fall on the spectrum for having high blood pressure, high cholesterol and diabetes, requires that you see a health professional regularly,” Dr. Everett says.

High blood pressure, high cholesterol and diabetes can each increase your risk for a heart attack. This is why Harris, Jones and Dr. Everett are spreading the word to everyone – especially the basketball community – to take heed of the second lesson: Learn CPR.

Harris, Jones and Dr. Everett continue to share a love for playing the game of basketball and are working to educate Chicago’s pick-up basketball community and other recreational athletes about the benefits of CPR. In partnership with specially-trained Advocate Trinity nurses, their Athletes Know CPR program offers hands-on training in CPR. For more information or to learn how this program can work with your athletic group, email: carisa.parker@advocatehealth.com or call 773-967-5310.