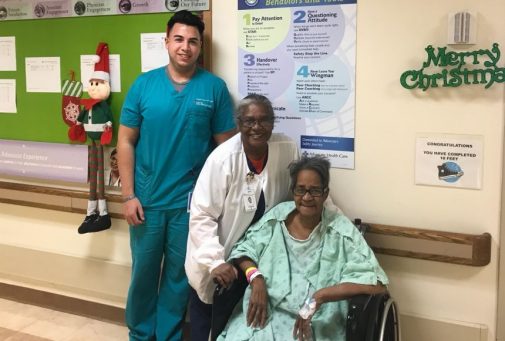 Suzanne had been suffering from kidney failure and high blood pressure due to her diabetes for years, which resulted in her need for a new kidney.

Worn down and unable to continue doing the things she loved due to her illness, Suzanne had, at one point, even considered giving dialysis up completely and letting nature take its course.

However, she would soon be surprised to discover her grandson had suddenly passed. While tragic, his family, who lived in Tennessee, had known Suzanne was ill. Through directed donation, they were then able to determine where the kidney would go – and of course, they chose to donate it to her.

Because the kidney was coming from Tennessee, it was transported overnight on a pulsatile perfusion pump, which helps to preserve organs for one to two days. The surgery was then performed the next morning at Advocate Christ Medical Center in Oak Lawn, Ill., by Dr. Deepak Mital, surgical director of the kidney transplant program.

“The kidney worked right away and is continuing to work great,” says Dr. Mital. “Because of this kidney, it’s likely Suzanne’s [future] lifespan will double. It’s the best Christmas present she could’ve received.”

Now, with her new kidney, Suzanne is looking forward to the New Year and her future.

“Before I was on dialysis, I used to be a homeschool teacher,” says Suzanne. “With this new kidney, I have a lot of energy and am looking forward to teaching again.”

Through her church, Antioch Christian Assembly, Suzanne used to teach junior students religion and science. Before her dialysis, she was also a frequent traveler and regularly enjoyed participating in activities at her senior home. While kidney transplant patients can’t travel for a year after their surgery, Suzanne says she is looking forward to traveling again in the future and doing the things she once enjoyed.

According to The United Network for Organ Sharing (UNOS), there’s a shortage of kidneys available, with roughly 116,004 people waiting for a lifesaving transplant like the one Suzanne received.

From this experience, Suzanne’s family has been inspired to register as organ donors and encourages others to do the same. UNOS says a singular organ donor can save eight lives.

← How risky is the latest diet craze?
Is this exercise always good for your heart? →