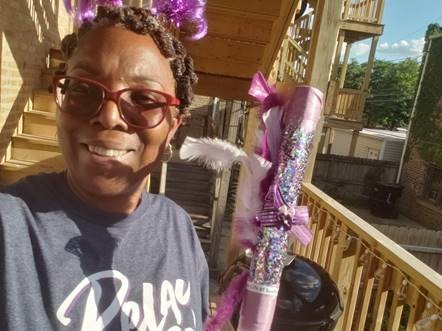 Thirty years ago, Shelley Walker wasn’t considering a career in health care — she wanted to be an architect. But as a young parent needing to make ends meet, she became a receptionist at Advocate Health Care. Four years in, Shelley realized her passion was to serve others, and that she wanted to stay.

She worked hard and was promoted into the referrals department before becoming the team lead. Only the second person in her family to attend college, Walker went back to school with the help of Advocate’s tuition reimbursement program and graduated with a degree in health care administration. And on the day of her 28th work anniversary, she became a Referral Supervisor at Advocate Sykes Outpatient Center.

Walker has always been inspired by Madam C.J. Walker (no relation), who in the early 1900s was a talented entrepreneur, activist, philanthropist, as well as the first Black woman millionaire in America. She made her fortune from her line of hair care products for Black women and donated large parts of her wealth to the NAACP, to charities and to scholarships for women.

“Madam C.J. Walker was an ordinary person making extraordinary strides for that time period,” Shelley Walker says. “She’s an example there’s more to our culture than what we were taught in our history books. And she’s relatable to me because we have many beauticians in my family who look up to her.”

“She always told me I could be more. And I try to reach out to others the same way,” Walker said. “My job is not just a job, it’s my ministry.”

And her ministry of serving goes beyond work.

For the past five years, Walker has led a Relay for Life team to raise funds to fight cancer. It began as hitting the wrong button while donating online and creating a team instead. She lost her dad and brother to cancer, so her thought was, “Maybe this was what I was supposed to do.”

That’s why she chose the team name Angels in the Mist. “I believe those we lose are still around us. They are my angels.”

Click here for more stories about doctors, nurses and others working on the front lines

← Should you wear two masks?
Black History Month: ‘How can we write new history?’ →