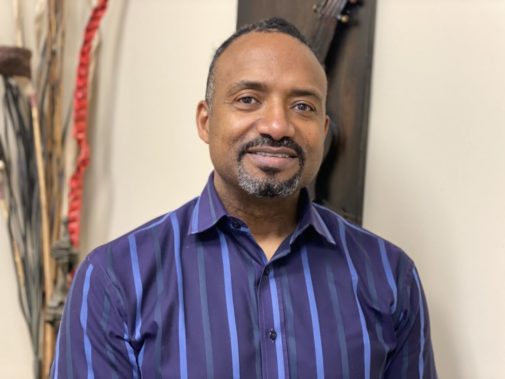 When he was listening to his daughter speak out against policy brutality and systemic racism at a rally in Barrington over the summer, Dr. Jude Duval heard something that shocked him.

Dominique, then 17, revealed that at times in her life she had been called a racial slur.

“She’s a student, whose parents are both doctors, we live in an affluent community, and she was still targeted in such a way,” said Duval. “She made people aware that racism is there. It tells you that the education about equality is not there. It is time that we as a society train our kids from the get go that everyone is a human being just like you.”

As a maternal-fetal medicine specialist at Advocate Sherman Hospital in Elgin, Ill., Duval has made it one of his goals to eliminate racial disparities in healthcare by doing just that – seeing each of his patients as a person just like him with unique needs and circumstances.

That day in June was the first time Duval had heard his daughter had faced such discrimination for her skin color, but the history of racism in America is one he’s very familiar with. As a 12-year-old boy, Duval immigrated from the small town of Jeremie in Haiti, joining his parents in Brooklyn.

He had heard stories of his father having to wait in segregated lines at the grocery store in Brooklyn and his brother participating in the Civil Rights movement. Duval quickly took to admiring Dr. Martin Luther King, Jr. for the sacrifices he had made to further equality for people of color in the United States.

“He’s one of my heroes because he was somebody who put his life on the line for equal justice and opportunities for all,” Duval said. “When you come to this country you realize and respect the struggles of those who came before you. When my parents came here, there was a ‘colored’ line at the store and now here I am being able to go to medical school.”

Duval was drawn to medicine at an early age. His grandmother was a midwife and his mother a nurse in Haiti. He studied how they provided compassionate care and hope for everyone and wanted to do the same.

“They inspired me to be good to others and to do good for everybody,” Duval said. “They told me to treat my patients as if they are a family member.”

One critical piece of caring for everyone, Duval said, is simply asking the patient about their daily life. Do they have access to childcare so they can attend several appointments in the office? Do they have transportation? Or would it be better to send the patient home with their own blood pressure monitor and perform some visits via tele-health?

“We can eliminate that social stigma that because you don’t have the means to get to all these appointments, you are a bad patient or even a bad parent,” Duval said. “You have to treat your patients on a case-by-case basis. Not everyone is the same. When you do that, you eliminate those barriers to care.”

“We have to erase those lines that have been in place for so long.”

← Black lives mattered then and they matter now
Addressing racial inequities in breastfeeding, one woman at a time →