Home / Advocate Medical Group / Do you stink? 3 smells that could mean something more

Do you stink? 3 smells that could mean something more 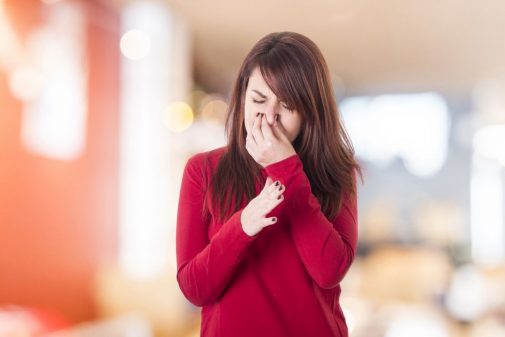 We’ve all been there. After a grueling workout or on a 90-degree day when you realize you smell. You might feel similarly after eating a dish full of onions or pungent spices, when you realize your breath reeks. And while these odors come with the territory and can be remedied by a shower or a quick Listerine rinse, others are more difficult to combat and can signal more serious problems.

“Body odor can signal much more serious issues like diabetes, infections, even athlete’s foot,” says Dr. Tony Hampton, a family medicine physician with Advocate Health Care. “The odors you emit can actually say a lot about your health and well-being, so it’s important to pay attention and speak up when you notice an irregularity.”

So which smells should you be on the lookout for, and what do they mean?

Dr. Hampton says these odors are cause for concern:

“Another potential indicator I’ve noticed is the smell of raw fish,” says Dr. Hampton. “Some of my patients with liver failure emit this odor. In addition, my psychology colleagues have suggested that some schizophrenia patients’ sweat smells of vinegar. Bottom line, if you notice a peculiar smell, and it lasts for a prolonged period of time, you should consult a physician.”