Home / Behavioral health / What are different kinds of dementia?

What are different kinds of dementia? 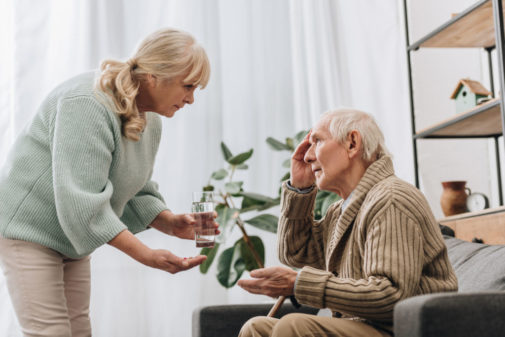 Memory loss that disrupts daily life, confusion with time or place and decreased or poor judgement are some of the early signs and symptoms of Alzheimer’s disease, according to the Alzheimer’s Association.

“Other warning signs such as loss of sense of smell or certain sleep disorders may not be practically useful for a specific dementia diagnosis because there are many causes of the former, and the latter is not closely linked in time to the onset of dementia,” said Dr. Darren Gitelman, director of cognitive disorders at Advocate Medical Group and senior medical director for Advocate Memory Center.

Gitelman says in addition to Alzheimer’s disease, there are other forms of dementia. Some of those other forms include vascular dementia, Lewy body dementia, frontotemporal dementia, primary progressive aphasia, and chronic traumatic encephalopathy.

The Alzheimer’s Association defines vascular dementia as a decline in thinking skills caused by conditions that block or reduce blood flow to parts of the brain, depriving it of oxygen and nutrients.

Lewy body dementia (LBD) is the second most common type of progressive dementia after Alzheimer’s disease, according to the Lewy Body Dementia Association. It is associated with the presence of Lewy bodies, which are abnormal deposits of a protein called alpha-synuclein, in the brain.

The Alzheimer’s Association says the nerve cell damage caused by frontotemporal dementia leads to loss of function in those brain regions.

Primary progressive aphasia is a neurological syndrome in which language capabilities become impaired, according to the National Aphasia Association.

When it comes to causes and risk factors for dementia, Gitelman says genetic causes are rare for Alzheimer’s disease, Lewy body dementia and vascular dementia. They are more common for frontotemporal dementia.

Gitelman adds that sleep disorders, and the use of medications with high anticholinergic properties such as over-the-counter sleep aids that contain diphenhydramine may also contribute to the risk for dementia.

The only approved treatments are those for Alzheimer’s disease, such as medications like donepezil, galantamine, rivastigmine and memantine, according to Gitelman.

“These medications may also be helpful in vascular dementia and Lewy body dementia, but they are not FDA approved for that purpose,” Gitelman says.

There are no approved treatments for frontotemporal dementia.

Aduhelm was recently approved by the FDA for Alzheimer’s disease.

Brittany Lewis is a media relations coordinator at Advocate Aurora Health. She previously worked as a reporter at TV stations around the Midwest, including Milwaukee. She studied at DePaul University where she majored in Journalism and Public Relations. Brittany enjoys traveling, hanging out by Lake Michigan, trying new restaurants and spending time with friends and family.