Home / Hispanic Heritage Month / Helping others, one tamale at a time

Helping others, one tamale at a time 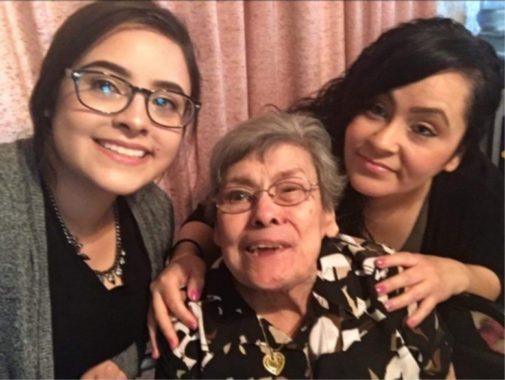 Making tamales on New Year’s Eve with her grandmother, Imelda, is a tradition Michelle Ochoa cherishes. The Mexican favorite not only represents her heritage, but also a deep love for the person she describes as her ‘second mother.” Today Ochoa, an ER tech in the pediatric emergency department at Advocate Children’s Hospital-Oak Lawn, makes tamales to make a difference for others.

Ochoa‘s grandmother came to the United States from Tampico, Mexico, in the 1950’s. After losing her husband early, she raised five children alone and became a second parent to her grandchildren as well.

“We all learned so much from my grandmother, Ochoa said. “Making tamales was always a family-affair. She taught us how to make them. Even when she became too ill to help, she’d sit at the table and make sure we were all making them correctly. There was so much love in the process.”

Ochoa lost her grandmother this year, just before Easter. But the tradition of making tamales continues. These days, the tamales are also spreading love in the community.

“I wanted to give back for all my family’s blessings” she said. “My 11-year-old daughter, Mya, and I have started a Facebook group called Kids Giving Back. I started making tamales to raise money for making life better for others.”

The money raised has helped buy gloves and gift cards for the homeless, as well as blankets and robes for local emergency departments and nursing homes. Her grandmother’s legacy lives on.

“My grandmother was such an amazing person,” Ochoa said. “She taught us more than just how to make tamales. She also taught us to be there for others. It’s a lesson that I am passing along to my children, as well.”

← Celebrating his heritage through hard work, extra effort and a kind word
‘I’m proud of where I came from’ →