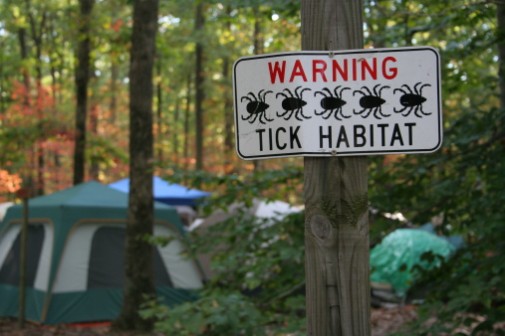 With summer in full swing, concern about ticks grows. And with ticks come Lyme disease, an infection caused by a bacterium (Borrelia burgdorferi) found in some black-legged or deer ticks. This bacterium is generally found in nymph stage deer ticks, immature ticks about the size of a poppy seed. (Adult ticks, in comparison, are about the size of a sesame seed.) When the infected ticks bite, the bacterium gets transferred causing Lyme disease.

According to lymdisease.org, Lyme disease is also known as “The Great Imitator” because it mimics symptoms of other diseases. If left untreated, it can affect any part of the body, including the heart, brain, nervous system, muscles and joints.

The disease is most commonly found in the northern Midwest states, the Northeast and the Pacific Northwest, areas that are populated by white-footed mice and deer, which make excellent hosts for deer ticks, and are in close proximity to humans.

What to Look For
It’s important to know what to look for to determine if you have contracted Lyme disease. Three stages of symptoms generally occur, according to the National Institutes of Health, although not everyone experiences all three.

First stage: Early localized Lyme disease, where infection is not yet widespread throughout the body. The first sign of infection may be a uniform red rash, although this does not occur in all cases. This rash may later become what’s known as a bull’s eye rash, which is a circular rash with a characteristic “bull’s eye” appearance (red spot in the center surrounded by an expanding red rash). Symptoms may also include chills, fever, muscle pain and headache.

Dr. Prentiss Taylor, an internal medicine doctor with Advocate Medical Group in Chicago, explains that rashes do not occur in everyone; about 80 percent of people get them. When they do appear, Dr. Taylor says, they are found “near armpits, on the trunk and by the groin. And the rash does not have to be at the exact sight of the tick bite, but most often is.”

Second stage: Early disseminated Lyme disease, where the bacteria have begun to spread throughout the body. Symptoms may include paralysis or facial muscle weakness, swelling in the knees and other large joints and heart problems, including palpitation. These symptoms usually appear several weeks after the tick bite, even for those who have not developed a rash.

Third stage: Late disseminated Lyme disease, where the bacteria have already spread throughout the body. Symptoms most common at this stage include joint and muscle pain along with abnormal muscle movement, numbness, tingling and speech problems.

Treatment Options
If treated with the proper antibiotics in the early stages of Lyme disease, it is possible to have a complete and rapid recovery, according to the Centers for Disease Control and Prevention (CDC).

He adds that the type of treatment received depends on the stage of Lyme disease. “The treatment is longer for late-stage Lyme disease vs. early stage. The difference between the two is taking antibiotics for one week vs. several weeks,” he says.

In terms of the effectiveness of antibiotics, they seem to work pretty well. “Eight-nine to ninety-nine percent of people have good results with this treatment. It’s pretty effective because it’s a microbe being killed by an antibiotic,” says Dr. Taylor. After starting treatment, people generally feel back to normal within several weeks.

Once upon a time a Lyme disease vaccine existed, but as of 2002, this is no longer available. The CDC reports that the vaccine diminishes over time so those who received the vaccine before 2002, may no longer be protected against Lyme disease.

Prevention
The best defense again Lyme disease is reducing exposure to ticks, which means taking extra care during the warmer months between April and September, when ticks tend to be most active.

The CDC recommends the following to prevent tick bites:

To find and remove ticks from your body, the CDC recommends the following tips:

Dr. Taylor adds that checking for ticks is particularly recommended for those who go camping, particularly in areas such as Wisconsin, Indiana, Minnesota and parts of Illinois where ticks may be prevalent. He recommends using DEET spray and considering long-sleeved clothing during tick season.

Since tick bites are usually painless, watch for unusual rashes and other symptoms. If you suspect you may have a tick bite or Lyme disease, Dr. Taylor recommends that you contact your doctor.

“Go see your doctor to get your history and a physical. It’s unlikely that you have Lyme disease if you haven’t had contact with ticks. It’s not an urban disease,” says Dr. Taylor.

← What’s in your green tea?
How to help seniors beat the heat →