What’s in your green tea? 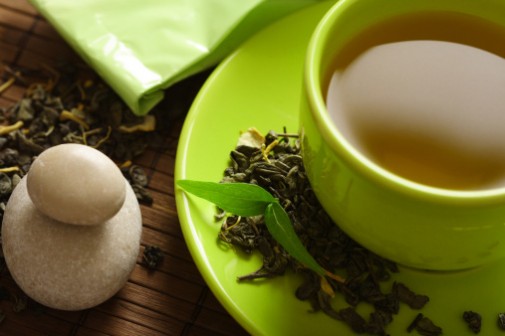 Green tea has been around since 2737 B.C. For many, the ancient Chinese beverage is synonymous with good health because of its wealth of antioxidants and metabolic-boosting benefits.

Over the last 10 years, green tea sales have boomed, with some estimates showing that Americans drink nearly 10 billion servings each year.

But a new report by an independent laboratory may cause some to second guess green tea benefits. According to the report published by ConsumerLab.com, some bottled varieties are little more than sugar water that contain very little amounts of the antioxidants that has made the tea popular. The research also shows that some green tea leaves, particularly those from China, are contaminated with lead, though it does not appear much of the metal seeps out during the brewing process.

However, researchers found that green tea brewed from loose tea leaves have the best and most potent antioxidants, like epigallocatechin gallate, or EGCG. Research linking EGCG to weight loss and cancer prevention has helped to fuel green tea popularity—making it the second most popular tea in the U.S. behind black tea according to the Tea Association of the USA.

Closer Look at the Research
As part of the study, researchers looked at green tea in several phases. In one phase, they unpacked the nutritional labels of four varieties of bottled green tea beverages sold in stores. This included two popular brands: Diet Snapple Green Tea, which they found contained little to no EGCG and Honest Tea’s Green Tea With Honey, that claimed to have 190 milligrams of catechins, but researchers found that it only had about 60 percent of that. The beverage also contained 18 grams of sugar and about 70 milligrams of caffeine.

Another phase of the study took a closer look at green tea loose leaves, which is its more natural form. Researchers specifically checked out those sold by Teavana, as well as tea bags sold by companies like Lipton and Bigelow. What they found will certainly be soothing to Teavana drinkers. A single serving of of the company’s Gyokuro green tea, about one teaspoonful, is packed with antioxidants—about 250 milligrams of catechins, a third of which were EGCG.

There is good news for Lipton and Bigelow green tea drinkers as well. Their tea bags were found to have somewhat smaller but still good amounts of antioxidants as well.

Researchers say the most surprising phase of the study was their lead content findings. Green tea leaves in the Bigelow and Lipton tea bags did contain measurable amounts of lead—approximately 1.25 to 2.5 micrograms per serving. Teavana leaves did not have any measurable lead amounts.

In an online statement, the president of ConsumerLab.com, Dr. Tod Cooperman said, “Lead can occur in many botanical products because it is taken up from the ground.”

That’s why Dr. Cooperman believes that the tea leaves containing lead probably originated in China, where studies have found  that leaves can gather larger amounts of lead in some regions.

Researchers say the good news for green tea drinkers is that the small traces of lead found in brewed teas poses no real health concerns.