Home / Cancer Care / Relay for Life participants walking for a cause

Relay for Life participants walking for a cause 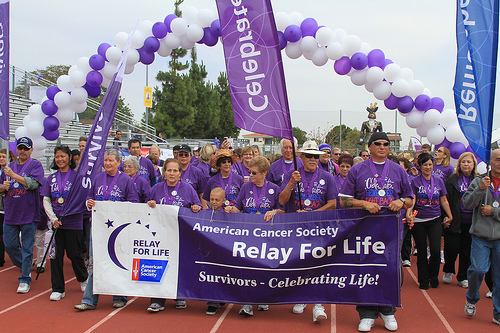 Since 1985, millions of people have joined in the annual American Cancer Society’s (ACS) Relay for Life fundraising event. Each one has a story.

Patti LeTourneau has hers.

Patti who lives in Palatine, Ill., is walking this July to honor her mom, Kathy Krueger, who died after battling lung cancer nine years ago. LeTourneau said her mom’s ordeal was long and painful but also inspiring.

“When my mom was diagnosed, she took the stance of fighter,” LeTourneau said. “The doctors originally gave her just six months to live but she fought it for two years. I’m convinced that her determination to fight the disease gave her those extra years. She was an amazing woman.”

According to Relay for Life, more than 4 million people in over 20 countries raise funds and awareness to save lives from cancer each year. The overnight event features teams of people camping out around a track while team members take turns walking loops. The first ever event was held in 1985.

Getting together with hundreds of people who have been touched by cancer in some way is a moving experience Letourneau said.

“It’s so empowering to walk with complete strangers who quickly become your friends,” she said. “There is a feeling of oneness and community. It’s very uplifting.”

Cancer is the second leading cause of death among Americans annually, according to the Centers for Disease Control and Prevention (CDC). More than 574,000 died from cancer in 2010, the CDC reports.

The ACS says funds raised from Relay for Life are making a critical difference in the fight against cancer. The quest for a cure may seem overwhelming for some but Letourneau said she feels positive about the future.

“With so many dollars being raised, there has to be light at the end of the tunnel,” LeTourneau said.

← Are you washing your hands correctly?
More Americans tracking their personal health data →