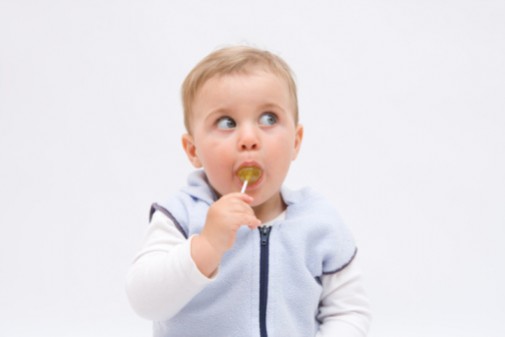 If you find the idea unsettling, you’re not alone, but perhaps you may be put at ease by knowing there is actually no breast milk involved. The makers of the new treat say the lollipops only taste of breast milk and are really made from artificial and other natural ingredients.

In an interview with ABC News, the company owner, Jason Darling, said he came up with the idea after noticing his friends could easily calm their fussy infants with “just a few drops of breast milk.” He said in order to make sure he got the flavor just right, he asked some of his hip friends if he could try their breast milk. And they said yes. Then a group of scientists worked their magic and voila—the lollis are now on the market.

Darling says by going this route, the lollipops can actually hold up during the candy-making process. Plus, he says it would take “way too much breast milk,” to keep the treats in stock.

Apparently the idea of the breast milk lollis is a huge hit for many. After putting the candy on his website, Darling sold several thousand in just a couple of days. And sales continue to pour in.

Minus a few hiccups here and there—like bloggers who have weighed in on how gross they think the idea is—Darling says his company, Lollyphile, is making the most of having the world’s “most interesting and innovative candy.”

This new twist of flavor is pretty much a 360 from the company’s other candy options, which are primarily for adults. The website offers flavors like chai tea, maple-bacon, pomegranate and even alcohol-flavored lollipops. All of the lollis, including the new breast milk option retail for around $2 to $10.