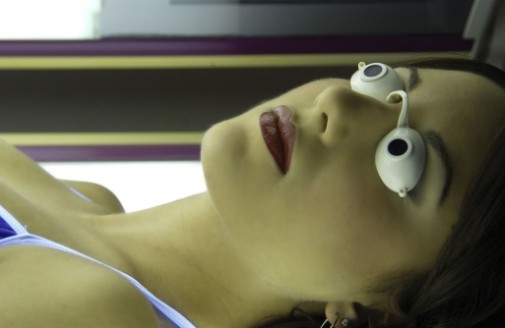 You’ve heard of smokers who’ve been diagnosed with lung cancer yet still continue to smoke, right? Well, a recent research letter published in the July 2013 issue of JAMA Dermatology reveals a similar phenomenon for those diagnosed with melanoma or skin cancer.

According to the study results published in the letter, individuals with basal cell carcinoma (BCC) are at a greater risk for skin cancer in the future, but they increase their risk further by continuing to participate in indoor tanning.

“The levels of UVA radiation during indoor tanning are up to three times that of UVA rays that reach the earth from the sun,” says Dr. Tony Hampton, a family medicine physician with Advocate Medical Group in Chicago.

The study research also reveals that this behavior may indicate an addiction to indoor tanning similar to substance dependence.

Study participants included 178 Non-Hispanic white patients younger than age 40 who had tanned indoors prior to their BCC diagnosis and who had also participated in a BCC study one to four years earlier.  Of those participants, 15 percent reported tanning indoors in the past year, and 8 percent were labeled as frequent indoor tanners, despite the reported harmful effects of indoor tanning.

The study also found that 58 percent of indoor tanners diagnosed with BCC were more likely to experience symptoms of tanning dependence such as the need to tan first thing in the morning or feelings of guilt compared to 38 percent of those who had not tanned indoors since their BCC diagnosis.

According to skincancer.org, indoor tanners who tan frequently show signs of both physical and psychological dependence. Signs of physical dependency with substances include increased tolerance, craving and withdrawal. Studies show that UV light increases release of endorphins, those feel-good chemicals that give us pain relief and happy feelings, which can potentially lead to dependency.

“Just as tobacco is known to be addictive, our research suggests that some patients may become dependent on tanning, with new intervention approaches needed to change these behaviors,” said lead study author Brenda Cartmel, a cancer prevention researcher at the Yale School of Public Health in New Haven, Conn.

← Longer vs. shorter workouts: What keeps you healthier?
Can your child’s ADHD be improved through diet? →