Home / Parenting / When your kid’s cold is really an allergy

When your kid’s cold is really an allergy 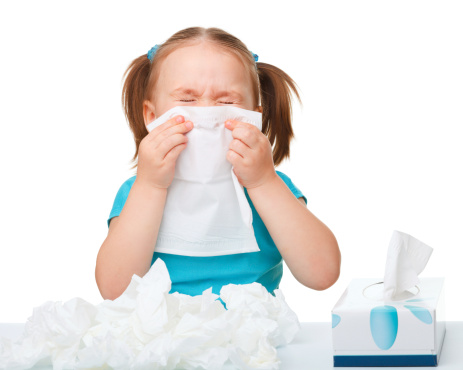 Fall is approaching. Not only does the season change bring allergies, but colds as well, and as a parent, sometimes it’s hard to know which one your child is suffering from. Though both have symptoms in common, it’s important for parents to know the difference.

Colds come from viruses and call for rest, pain relievers and over-the-counter remedies such as decongestants. Dr. Aijaz Alvi, an otolaryngologist with Advocate Good Shepherd Hospital in Barrington, Ill., says the following factors may be clues that your child has a cold:

Seasonal allergies, on the other hand, are the result of an immune system response that gets triggered by an allergen. They usually call for over-the-counter or prescription antihistamines, nasal steroid sprays as well as decongestants and minimal exposure to allergens. Dr. Alvi says allergy drops, which parents can place under their child’s tongue, are a recent development in allergy treatment growing in popularity that may also prove helpful.

According to Dr. Alvi, indicators that your child may have an allergy include:

“If your child has a runny nose and doesn’t have a fever, but has sneezing, itchy, watery eyes, a stuffy nose and scratchy throat, more than likely it’s an allergy,” says Dr. Kim Watts, a pulmonologist with Advocate Children’s Hospital in Park Ridge, Ill.

For parents who suspect their child may have an allergy, Dr. Watts says they can do a trial with an over-the-counter antihistamine in the morning and in the evening to see if it helps symptoms. If it is an allergy, and a mild one at that, Dr. Watts says kids should still be able to enjoy activity. “Most kids, with medical management, should be able to go outside and play. If you have a child who can’t go outside, then the child should be evaluated by a physician,” she says. “With enough simple medications we shouldn’t limit kids’ activities because of allergies.”