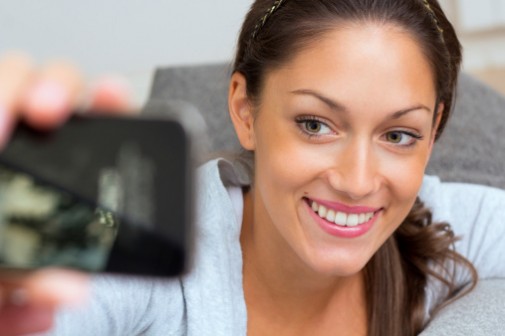 If you search Instagram for “#selfie,” you’ll get a whopping 62,835,942 photos. The smartphone self-portraits dominate the social media world. And now, selfies aren’t only fun to shoot and share; now they could save your life.

Engineers at Cornell University have developed technology that uses color analysis from phone camera images to test cholesterol levels. The device “optically detects biomarkers” in a drop of blood, sweat or saliva, developers say. Called the Smartphone Cholesterol Application for Rapid Diagnostics, or “smartCARD,” the test can read levels in just about a minute.

More than 70 million Americans have high cholesterol, which is a known cause for stroke and heart disease according to the Centers for Disease Control and Prevention.

Here’s how it works.

The user places a drop of blood on a test strip that analyzes a series of chemical reactions. After that, a smartphone app uses “colorimetric analysis,” to discern the results.

The kit includes a device that attaches over the lens of a smartphone camera. When you shoot a photo of your face, a built-in flash sends out uniform and diffuse light over the image area. Then the color hues in the photo are compared with the color hues on the test strip. The results are then displayed within an app on your phone.

“Smartphones have the potential to address health issues by eliminating the need for specialized equipment,” said David Erickson, Cornell associate professor of mechanical engineering in a news release.

Developers say the smartCARD is ready for market now and hope to increase its capabilities after launch. “Mobil health is increasing at an incredible rate,” Erickson said. “It’s the next big thing.”

← Keep the germs at bay this holiday season
Are you a cell phone addict? →