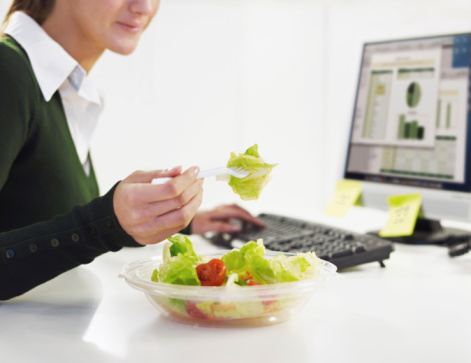 Do you ever find yourself with crumbs on your keyboard and jelly on your mousepad?

According to a study from Right Management, you are not alone. Nearly 65 percent of working Americans eat their lunch at their desk.

But how many of those people make that choice because that’s truly what they want to do? The study finds that when employees choose to stay at their desk during their break, they feel good about their decision and are less tired at the end of the day.

“We found that a critical element was having the freedom to choose whether to do it or not,” said study leader, John Trougakos, in a news release.

The study, from the University of Toronto, suggests that when people don’t feel pressured to step away, then they actually are more energetic at the end of the day.

“The autonomy aspect helps to offset what we had traditionally thought was not a good way to spend break time,” Trougakos says.

Researchers looked at how employees, who primarily spend their day at a desk, spend their lunch break over a 10-day period. They then surveyed their co-workers on how energetic or lethargic they looked at the end of the day.

The findings, published in Academy of Management Journal, also showed that those who socialized during their break actually led to more exhaustion at the end of the day.

Trougakos believes that although we may think that social interactions are a good outlet for employees to unwind, this may not be the reality. He says that those groups who chose to do this activity may not necessarily kick back and be themselves so may produce more anxiety and stress on their break.

He adds that when workplaces don’t give employees the chance to recuperate throughout the day, they may actually be contributing to “lower worker effectiveness and productivity, leading to burnout, absenteeism and higher staff turnover.”