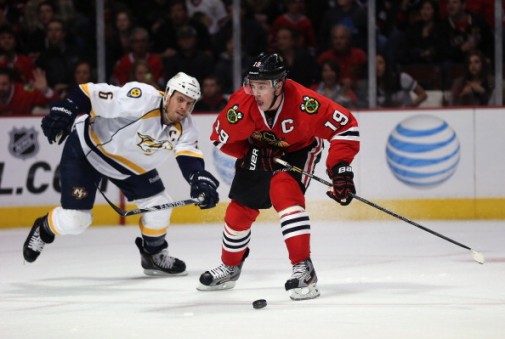 Most professional hockey players are at the top of their game in their late 20s and don’t improve much in years following, says new research.

Using statistical analysis, study leaders at the University of British Columbia found that forwards are at their best between the ages of 27 and 28, defensemen top out at 29. Goalies’ performance wasn’t affected by age.

“While confirming conventional wisdom that players peak in their late 20s, the study proves it is wishful thinking for managers to expect a player in his mid-20s to continue improving significantly,” said study leader James Brander, in a news release. “The vast majority of players are at 90 per cent of their best by age 24, although there are a few late bloomers.”

The findings will be published in the Journal of Quantitative Analysis in Sports.

And with the Chicago Blackhawks in hot pursuit of the Stanley Cup, Brander says the team’s stars, Patrick Kane and Jonathan Toews, are prime examples of the age study.

“If we just go by relative age of key players, a team like Chicago would appear to be in the best shape. But that’s far from the whole story in the playoffs. Other things have a big effect, such as injuries and luck,” he says.

Researchers analyzed statistics from more than 2,000 player from 1997 to 2012. They compared the number of points scored compared to the player’s ages to reach their conclusions.

← How do you live your #HealthiestLife
Is fear a factor for double mastectomy? →