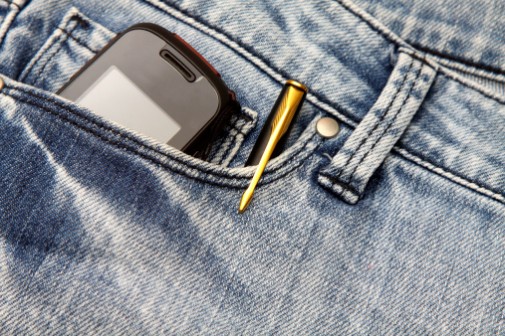 A recent study published in the Environmental International journal recommends that men keep their cell phones out of their pockets. The study suggests that keeping your cell phone in your pocket could lead to a decrease in fertility.

About 10 studies were conducted to test mens’ fertility versus the radio frequency electromagnetic radiation coming from cell phones.

The research showed that viability and motility (or movement) was affected by the electromagnet frequencies; which researchers said caused a decline in sperm fertility.

The radiation’s exposure time and amount of exposure in general were two contributing factors in the study.

The radiation can actually heat up body temperature, and research shows that your face could increase by about two degrees Celsius after only six minutes of cell phone exposure time.

This raise in body temperature heats up testes which cause the declines of overall fertility and the ability for sperm to travel. According to research, this heating is more effective than the radiation itself.

“Given the enormous scale of mobile phone use around the world, the potential role of this environmental exposure needs to be clarified,” said lead researcher Dr. Fiona Mathews, of the University of Exeter, in a press release. “This study strongly suggests that being exposed to radio-frequency electromagnetic radiation from carrying mobiles in trouser pockets negatively affects sperm quality. This could be particularly important for men already on the borderline of infertility, and further research is required to determine the full clinical implications for the general population.”

Researchers say that there will be future studies need to be done in the near future.