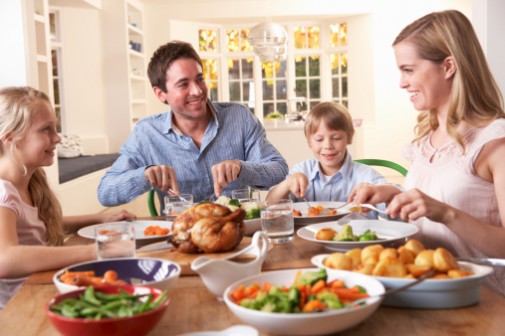 Our parents serve as a model for much of our behavior when we’re young. It stands to reason then that children treated for weight issues alongside a parent fare much better than those treated alone.

New research, published in the late July edition of Pediatrics, revealed that when overweight and obese preschool children were treated with behavioral intervention in a primary care setting with their parents, results were better. Both parents and children experienced greater decrease in body mass index (BMI) compared to children treated by themselves, and both were able to sustain the weight loss after a 12-month follow-up.

Nearly 100 study participants, between ages 2 and 5 with high BMIs and an overweight parent, received diet and activity education over a 12-month period.

Parents delivered intervention for their children by instructing them on the proper food servings and appropriate calorie values. Kids were taught to avoid “high-energy” foods, such as those high in sugar, those that included more than 5 grams of fat per serving or artificial sweeteners.

Weight loss goals for children were .5 to 1 pound per week. For parents, it was at least 1 pound weekly.

Parents treated along with their children lost an average of 14 pounds while parents of children treated alone experienced no weight changes.

“Instead of the more traditional approach of referring these patients to a specialty clinic, the patient-centered medical home in the pediatrician’s office may be an ideal setting for implementing these family-based treatments,” said lead study author Dr. Teresa Quattrin in a statement. Quattrin is a pediatrician and chair of pediatrics at the University at Buffalo in New York.