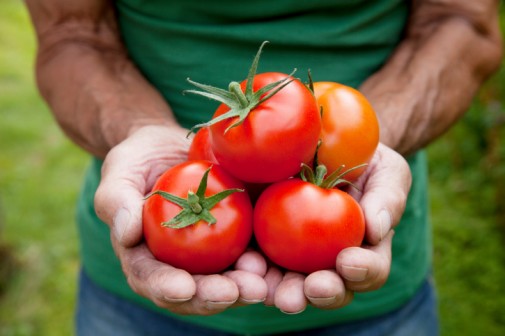 English researchers say that men who consume more than 10 portions of tomatoes weekly can lower their risk of getting prostate cancer by 18 percent.

Study leaders at the Universities of Bristol, Cambridge and Oxford, analyzed the diets of nearly 2,000 men between the ages of 50 and 69 who had prostate cancer as compared with 12,000 men who were cancer-free.

They discovered that those, whose diets were rich in tomatoes and related foods like tomato juice and baked beans, were less likely to have prostate cancer. The findings are published in the journal Cancer Epidemiology, Biomarkers and Prevention.

Lycopene, an antioxidant that fights off the toxins that can cause DNA and cell damage, appears to be the main ingredient in providing the protection against the cancer, researchers said.

“Our findings suggest that tomatoes may be important in prostate cancer prevention,” said lead researcher, Vanessa Er in a statement. “However, further studies need to be conducted to confirm our findings, especially through human trials. Men should still eat a wide variety of fruits and vegetables, maintain a healthy weight and stay active.”

Prostate cancer is the most common cancer in men in the United States, according to the U.S. Centers for Disease Control and Prevention. Each year, more than 206,000 men are diagnosed and nearly 30,000 will die from the disease.

According to the American Cancer Society, early prostate cancer usually causes no symptoms. But advanced prostate cancers can cause some symptoms including:

← 4 tips to adjust to the school year sleep schedule
September: A dangerous month for young pedestrians →