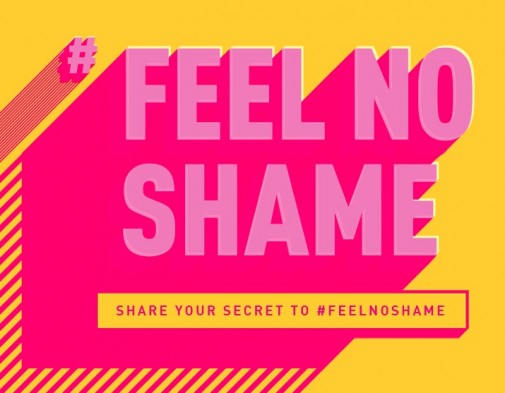 An estimated 35 million people worldwide—1.2 million in the U.S.—are living with HIV, the virus that causes AIDS. In an effort to open conversation about the condition—particularly for the infected children of Africa—celebrities Prince Harry, Joss Stone and Nicole Scherzinger joined thousands to share their secrets on social media using #FeelNoShame.

Prince Harry’s secret? That he gets “incredibly nervous before public speaking, no matter how big the crowd or the audience,” he says in the video posted to YouTube. Scherzinger, former member of the Pussycat Dolls, admits that she sometimes doesn’t “feel like I’m enough, I’m worth it and that I don’t fit in.” And Stone reveals that she can’t stop at a gas station without using the restroom.

The charitable organization Sentebale launched the #FeelNoShame campaign on this year’s World AIDS Day, yesterday, to mark the day as “a day on which no one should feel any shame about their secrets,” the prince says in a statement. “Together, we can tackle the stigma surrounding HIV and give the young people carrying it the childhood that they deserve—the childhood that so many of us take for granted.”

HIV is the second highest cause of death globally among young people ages 10 to 19, as well as the top cause of death overall in Africa. Sentebale was founded by Prince Harry and Prince Seeiso of Lesotho in 2006. The southern Africa nation has the third-largest rate of HIV/AIDS in the world, including 38,000 HIV-positive children.

Some of the #FeelNoShame posts were serious, some playful, but all targeted at opening the conversation on what we fear most to help normalize the perceptions of such secrets.

“My secret is…I have a fear of butterflies and moths. They terrify me,” one poster wrote.

“Sometimes, I lock myself away and stay silent, waiting for someone to notice I’m gone,” another said.

“I was raped and my 8 year old daughter is from that. I couldn’t imagine my life without her. She is sweet and amazing,” another confessed.

The campaign offers a way to open dialogue around a sensitive subject, but such revelations should be thought through, says Dr. Joanne May, a psychologist with Advocate Illinois Masonic Medical Center in Chicago.

Though the sharing of such secrets, particularly those that may include others, can be momentarily cathartic, there are often long-term consequences to the revelation.

She says with deep, painful secrets, you should carefully consider posting to social media, but choose those you know and trust to share with to ensure you receive the proper support.

“This campaign aims to normalize something that is normally kept under wraps due to shame or stigma,” Dr. May says. “Many people have performance anxiety. It really helps them to know there are wonderful, successful people who share the same struggle.”

“For health conditions, including HIV, depression and anxiety, people will often suffer in silence, thinking there are no routes to support.”

Dr. May says commonly discussed conditions, such as pregnancy and even a cancer diagnosis are more easily shared today than they were decades ago due to changes in public perception by “bringing things into the light.” And, she says one person sharing their story frees many others who may not open up themselves to know they’re not alone.

She says there are many levels of participation, so participants should carefully consider what they may post so publically.

“Once you say something aloud, you can never take it back.”

← A pill for binge drinkers?
How a diet change can affect epilepsy →