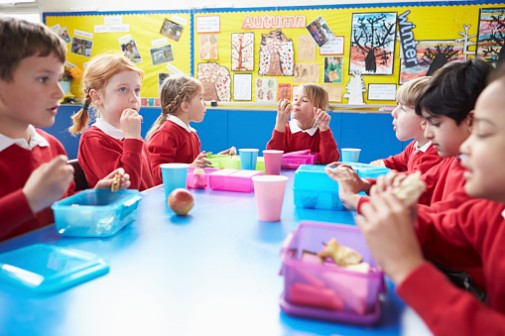 Students that have less than 20 minutes to eat their lunch are more likely to consume less of their entrées, milk and vegetables than those who aren’t rushed, according to a new study published in the Journal of the Academy of Nutrition and Dietetics.

To better understand food choices and intake, Harvard researchers analyzed the length of lunch periods at six elementary schools with more than 1,001 elementary and middle school students in low-income districts. Researchers recorded the amount of food that was left on each child’s tray.

“Many children, especially those from low-income families, rely on school meals for up to half their daily energy intake so it is essential that we give students a sufficient amount of time to eat their lunches,” said Juliana Cohen, lead author of the study and assistant professor in the Department of Nutrition at Harvard Chan School, in a news release. “Every school day the National School Lunch Program helps to feed over 30 million children in 100,000 schools across the U.S., yet little research has been done in this field.”

Researchers also found that more food was wasted when students had less time to eat. In addition, some students only had 10 minutes to eat their lunch if they arrived late or had to wait in long lines.

“We were surprised by some of the results,” said study co-author Eric Rimm, who is also a professor of epidemiology and nutrition at Harvard Chan School. “I expected that with less time, children may quickly eat their entrée and drink their milk but throw away all of their fruits and vegetables. Not so – we found they got a start on everything, but couldn’t come close to finishing with less time to eat.”

Jamie Portnoy, a dietitian at Advocate Condell Medical Center in Libertyville, Ill., believes that allowing enough time for kids to eat a well-balanced meal gives them the chance to become full and can essentially help kids stay focused and perform better in school.

“Eating slowly and savoring every bite will not only make the meal more enjoyable, but it will also help with digestion,” says Portnoy.

She says more time will also aid in preventing kids from snacking on junk food later in the day.

The National School Lunch Program was passed almost 70 years ago to help provide low-cost or free meals to qualified students through subsidies to schools.

In 2012, new standards for school meals was unveiled. These included offering both fruits and vegetables every day of the week, increasing whole grain-rich foods, offering only fat-free or low-fat milk, limiting calories based on the age of children, and reducing the amounts of saturated fat, trans fat and sodium.

← Should all women be tested for BRCA mutations?
Are athletes drinking too much water? →