Physical activity may extend life of people with prostate cancer 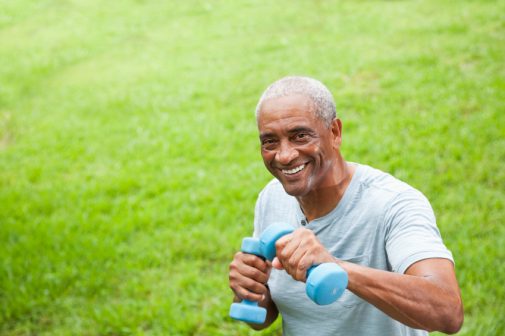 Staying physically active could have an immediate and sustained impact on fighting prostate cancer, according to a new American Cancer Society study.

The study monitored more than 10,000 men, ages 50 to 93, who were diagnosed between 1992 and 2011. Their prostate cancer had not spread beyond their glands. The men provided researchers with information about their physical activity before and after diagnosis. Men with the highest levels of exercise after diagnosis were 34 percent less likely to die of prostate cancer than those who did the least exercise, the study found.

“Exercise is something that can make an instant difference when it comes to fighting prostate cancer,” says Dr. Nelcar Gadrinab, a urologist at Advocate Trinity Hospital in Chicago. “Physical activity is something that I tell my patients is essential. You have to get the patient involved in their own care, and their family has to get involved, as well.”

The American Cancer Society recommends at least 150 minutes of moderate intensity or 75 minutes of vigorous intensity activity each week. Obesity increases the risk of many types of cancer, while inversely, physical activity may reduce the risk of breast, colon, uterus and prostate cancers.

The American Cancer Society study was presented at an annual meeting of the American Association for Cancer Research (AACR) in New Orleans.

“Our results support evidence that prostate cancer survivors should adhere to physical activity guidelines and suggest that physicians should consider promoting a physically active lifestyle to their prostate cancer patients,” said Ying Wang, a senior epidemiologist at the cancer society’s epidemiology research program, in an AACR news release.

The World Cancer Research Fund estimates that about 20 percent of all cancers diagnosed in the U.S. are related to obesity, physical inactivity, excess alcohol consumption or poor nutrition.

← The dangerous impact of sleepy teens
6 tips for apologizing effectively →