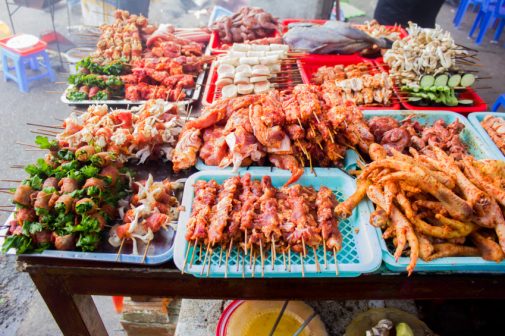 Enjoying a daily breakfast buffet or a few margaritas by the pool may seem appropriate during summer vacation, but new research reports those indulgences can translate into a pound or more of extra weight when you return home.

“Vacations provide a great time to relax and reconnect with family and friends,” says Elizabeth Zawila, registered dietitian at Advocate Good Samaritan Hospital’s Health and Wellness Center in Downers Grove, Ill. “However, it’s quite common for travelers to disregard their healthy eating habits while on the road and regret their food choices when they return home.”

In fact, a new study from the University of Georgia’s College of Family and Consumer Sciences found that people tend to gain up to seven pounds during their vacations.

As Americans continue to struggle with rising obesity rates, researchers are concerned with the study’s results.

“If you’re only gaining a pound or two a year, and you gained three-quarters of that on a one- to three-week’s vacation, that’s a pretty substantial weight gain during a short period of time,” said Jamie Cooper, associate professor in the college’s department of foods and nutrition, in a press release.

The study involved 122 adults between the ages of 18 and 65 who went on vacations ranging from one to three weeks in length between March and August. Study participants’ height, weight, body mass index, blood pressure and waist-to-hit radio measurements were taken one week prior to vacation and then one week and six weeks after the trip.

A total of 61 percent of participants gained on average 0.7 pounds, which increased to 0.9 pounds throughout the entire study. While some participants lost weight, others gained as much as seven pounds, even though participants reported being more physically active while on vacation. On the flip side, that physical activity decreased when they returned home.

“One of the challenges people face is that unless you’re diligent about weighing yourself before and after vacation, usually you’re not going to notice a pound of weight gain,” said Cooper. “People don’t realize it’s happening, and that’s why they don’t lose weight following a vacation.”

While it’s natural to splurge on an extra glass of wine or even dessert while traveling, Zawila says it’s still possible to eat healthy and not sabotage your entire diet.She suggests the following tips to stay on track during a trip: