Physical therapist takes his skills to new level: The Olympics 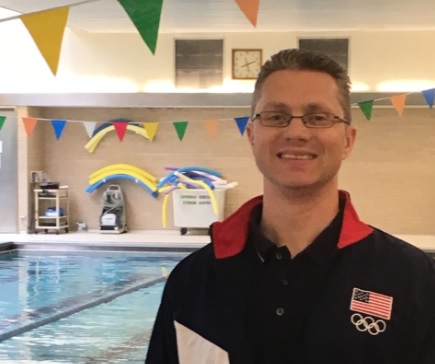 Since 1896, the United States has totaled more than 200 gold medals in men’s and women’s swimming. With the hard work, determination and passion of more than 100 elite athletes, the U.S. stands at the top of the board for the sport and continues to be a strong competitor in the Olympic Games.

An Olympic team is comprised not only of athletes; countless trainers, therapists and others work to ensure the competitors are in tip top shape. Many people dream of the chance to help. Being part of the Olympic Games is a once in a lifetime opportunity for those both in and out of the pool.

“I had been a part of the USA Swimming Sports Medicine and Science and was invited to be a member of their high performance network,” Cunningham says. “If a professional athlete needed treatment, I am the physical therapist they would call here in Illinois.”

In 2006, Cunningham decided to test his skills and began the screening process at the USA Olympic Training Center. After a skills assessment and training sessions, he was chosen by the national governing body of the USA swimming organization to be a part of their elite medical team.

“I really thought, ‘Okay, I want to try and test my skills against the best in the country. Can I compete and take care of the highest level athletes?” he says. “If I can do that, I can take care of the community I am serving to the best of my ability.”

Cunningham is the only physical therapist among a seven-member medical staff, spending his days with the “paragons” of swimming. He works with athletes such as Michael Phelps, Missy Franklin, Ryan Lochte and the Chicago hometown classic, Conor Dwyer.

On July 11, 2016, Cunningham will travel with the U.S.A swimming team to the training center in San Antonio, TX, where they will begin their final preparation for the Olympic Games in Rio de Janeiro.

With more than 23 years of experience in the physical therapy field, 18 of which have been spent at Lutheran General Hospital in Park Ridge, Ill., Cunningham brings a wealth of knowledge to the sport. His specific focus on outpatient sports medicine allows him to be sure that athletic injuries are being treated with proper and adequate care.

“Swimmers can develop different musculoskeletal injuries which can impair their training and performance,” he says. “Such problems include shoulder injuries, rotator cuff issues and back pain, so it is crucial that we examine these before they become too severe.”

Cunningham was a swimmer himself who has had two shoulder surgeries over the course of his career. He humbly and firmly believes that through his training and practice with the staff and physicians at Lutheran General Hospital, he is able to provide the top medical care to serve an Olympic team.

“At Lutheran General Hospital, we leave our egos at the door, and we do whatever it takes to make the patient better. With a team approach, this results in more versatility across the board and an overall holistic approach to health care,” he says.

Furthering his own skill to better serve the community, Cunningham says he owes his success to co-workers, managers and the programs in which he is involved.

Although the success and increased performance of the swimmers is Cunningham’s main priority this summer, he is also excited to learn new things and take his expertise back to his patients at Lutheran General Hospital.

← New concerns for workaholics
All it took was a second →