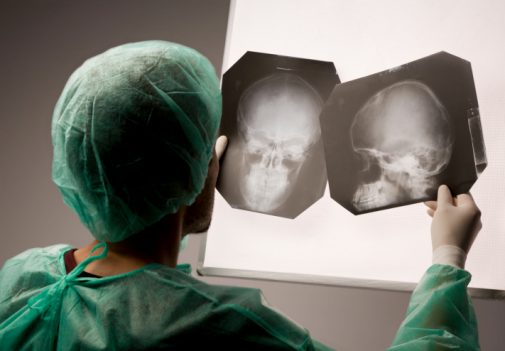 What is a traumatic brain injury (TBI)?

“Imagine stubbing your toe on the corner of your dresser. Initially, although painful, it does not swell. The next morning, it is purple and swollen. This is exactly what happens in the brain after a traumatic injury,” explains Dr. Raed Abusuwwa, a neurosurgeon at Advocate Good Samaritan Hospital in Downers Grove, Ill.

TBI begins with a physical blow to the head and spirals into regional or whole brain damage that is caused by natural body inflammation to the spot of injury.

The top three causes of TBI are car accidents, firearms or falls. While it is difficult to assess how many people suffer from TBI, the Centers for Disease Control and Prevention (CDC) estimates that there are approximately 1.5 million people in the United States that experience these injuries each year. The main concern related to TBI is that they do not heal like other injuries. Since each brain is unique, each person with a TBI has a different healing process and is affected differently by the injury.

Symptoms may appear right away or may present themselves days, weeks or even years after the injury. Currently, there are no available treatments for the long-term effects of TBI; however, researchers are making it a priority to understand the damage.

In an article published in the Journal of Neurotrauma, researchers from the University of Texas Medical Branch at Galveston (UTMB) explored the implications of a toxic form of tau protein that increases after a TBI and its link to dementia symptoms.

Rakez Kayed, associate professor of neurology and the Mitchell Center for Neurodegenerative Disease, said in a statement, “These findings provide direct evidence supporting our hypothesis that this form of toxic tau induces many of the symptoms of TBI and may be responsible for the increased risk for neurodegenerative disease and spread of impairments through the brain following TBI. Because this form of tau plays an important role in the toxicity underlying TBI, it may be a viable therapeutic target.”

Researchers at the University of Kentucky have also been looking into the flow of events from head injury to increased risk for degenerative brain disease.

“By defining the cascade of events that occurs after a mild brain injury, we ultimately hope to discover ways to disrupt that process,” said Adam Bachstetter, PhD, of the Sanders-Brown Center on Aging, in a news release.

In their research, they used a drug that blocks overproduction of a molecule that causes inflammation after a traumatic brain injury in mice. After three weeks, mice who received the drug no longer showed any learning or memory problems, while mice that didn’t get the drug showed many learning and memory problems.

That study sheds light on potential treatment options and could be modified for testing on humans.

Dr. Abusuwwa encourages patients with a suspected TBI to seek medical assistance immediately, particularly if they have the following symptoms:

Most of the current research is focused on preventing or reducing the effects of second stage brain injury caused by concussion. Even though there have been significant advancements in preventing the initial traumatic brain injury, such as protective gear for athletes, preventing secondary brain injury is still posing a challenge for health care providers.

Although a solution has not yet been found, the pace of new research surrounding brain inflammation is accelerating and helping doctors develop an approach to treating and preventing TBI.

← How I fixed my pee problem
Why does that guy give you the creeps? →