Home / Repurposed Story / Is breakfast really the key to your weight loss?

Is breakfast really the key to your weight loss? 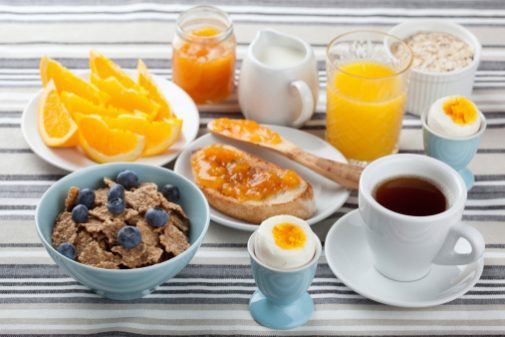 Breakfast has long been known as “the most important meal of the day.” In fact, many diets recommend eating a hearty breakfast even if you want to lose weight. But should you really eat if you’re not hungry? And does research actually support the “need” for breakfast?

While many studies have been done, the link between breakfast and losing weight is a weak one at best.

In terms of health benefits, one study done by the Harvard School of Public Health and Harvard Medical School found that men who skipped breakfast had a 27 percent higher risk of coronary heart disease compared to men who didn’t.

Another review published in the American Journal of Clinical Nutrition analyzed 58 published studies about the effects of breakfast on obesity. But the conclusions were mixed. They found that only one study conducted in the early 1990s really tested the effects of skipping or eating breakfast on losing weight. Researchers studied several moderately obese women between the ages of 18 and 55 and had them follow a 12 week weight loss program. They split them into two groups. One group had two meals a day, with no breakfast and the other group had three meals a day. Both groups ate the same amount of calories total each day.

Rosemary Mueller, a registered dietitian at Advocate Medical Group Weight Management in Park Ridge, Ill., explains why she believes there is a disconnect.

“This recommendation [to eat a nutrient-dense breakfast] was made by the Dietary Guidelines Advisory Committee after reviewing numerous observational studies, which researchers generally acknowledge are weaker than true experiments or randomized, controlled trials,” she says. “There was indeed modest evidence that children who do not eat breakfast are at increased risk of being overweight and even stronger evidence for adolescents. The criticism by some health statisticians has to do with the limited direct evidence of application to adults.”

So, should you or shouldn’t you eat “the most important meal of the day?”

Mueller says regardless of these criticisms, the answer is you should. “Breakfast has strong benefits: for the provision of important nutrients, to better regulate blood glucose levels, control appetite and to provide sources of fiber, calcium and protein,” she argues.

The bottom line: “Eat breakfast, but watch what your breakfast contains,” she says. “Resist ‘just coffee and that pastry or donut.’ Try an egg-white/veggie omelet, whole grain cereal, low-fat milk and fruit or a breakfast smoothie made from low-fat yogurt, fresh fruit and/or veggies and little bit of flax.”

← Does your cough indicate more than just a cold?
Can’t sleep? Don’t do this →