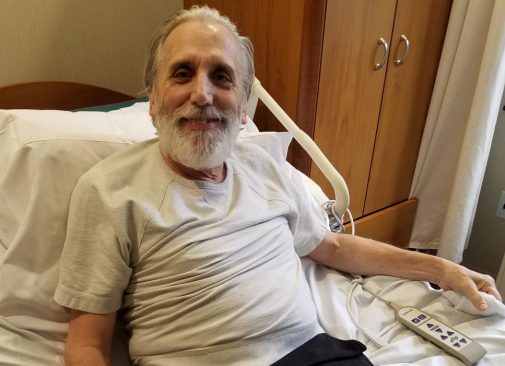 I’d just received a call from my primary physician, Dr. Carol Straka. After reviewing my lumbar-area MRI from earlier that morning, she knew something was wrong. “Clay, I want you to get over to Advocate Lutheran General Hospital as soon as possible and check in through the emergency department.” I picked up a toothbrush and a book and drove back to the emergency department, walking in at 4 pm.  What was going on?

Four days later, my legs gave out – I couldn’t take a step without a walker. I couldn’t control my bladder or my bowels. I wore a diaper and peed through a catheter. Most importantly, I still had no clue as to what was happening to me.

I knew nothing at all about Transverse Myelitis, or TM.

TM is a neurological condition that causes swelling of the Myelin Sheath surrounding your spine, causing the spinal cord to become inflamed. The spinal cord connects nerves throughout the body and, when damaged, it screws up communication between your brain, nerves and muscles from the waist down. This includes your bowels and bladder. You can’t walk. It takes hours to poop. Your pee gets drained by a catheter.

Immune system disorders, viral, bacterial or fungal infections, parasites, vascular disorders and inflammatory disorders can all cause TM, and in some cases, the cause cannot be identified. TM can come on suddenly, developing over hours or days, or can be subacute, meaning the condition can build over one to four weeks. An early lumbar-area MRI suggested that the cause of my TM was vascular, but after three spinal angiograms, that has not proven true. It’s more likely caused by my immune system, where an infection can trigger my antibodies to attack my spine rather than the infection that’s invading my body.

Symptoms of TM include weakness in the arms and legs, pain radiating down arms and legs or torso, sensory loss in the legs and bowel and bladder dysfunction. In my case, I’m completely numb from my waist to my toes, both outside and inside. Depression and pressure ulcers from too much wheelchair time has also been very challenging.

One really important event occurred within two days of my TM diagnosis: with the encouragement of my doctors and nursing staff, I realized that I had only one option – fight back every day. Giving in was not for me! So, I started my fight each morning with at least a half-hour of physical therapy on my bed. It’s made all the difference in my attitude and my body.

After spending over a year in and out of the hospital working with a team of doctors under the direction of Dr. Wayne Rubinstein at Advocate Lutheran General Hospital in Park Ridge, Ill., I am beginning a physical therapy rehabilitation plan. While there is currently no cure for TM, the condition is treated with plasma exchange therapy, corticosteroids to reduce inflammation, immunotherapy and pain medications.

And that’s pretty much what I’m working with now with two major exceptions:

First, I have accepted that I may never walk unaided again, and that would be okay. I can live in two worlds – your world of normality, and my handicapped disability world. Doing this, I can learn to live a very enriched life.

Second, I can fully embrace this new world and give back. Through various efforts, I want to provide support for those struggling with TM or any condition that affects mobility by helping them find ways to experience exciting adaptive adventures and also support ongoing research efforts on TM.

Clay Garner grew up in Akron, Ohio and earned his BA and MA from the University of Akron. He has lived in Chicago for over 20 years. In 2016, he contracted Transverse Myelitis. Following his diagnosis, he founded the Beat Transverse Myelitis Foundation – www.beat-tm.com – to help those with TM and other related neurological disorders resulting in walking challenges.

← 6 secrets to a younger brain
PPO, HMO, OMG! What do you need to know about your health care coverage? →

Clay Garner grew up in Akron, Ohio and earned his BA and MA from the University of Akron. He has lived in Chicago for more than 20 years. In 2016, he contracted Transverse Myelitis. Following his diagnosis he founded the Beat Transverse Myelitis Foundation – www.beat-tm.com - to help those with TM and other related neurological disorders resulting in walking challenges.