‘I’m very fortunate to have him as my Dad’ 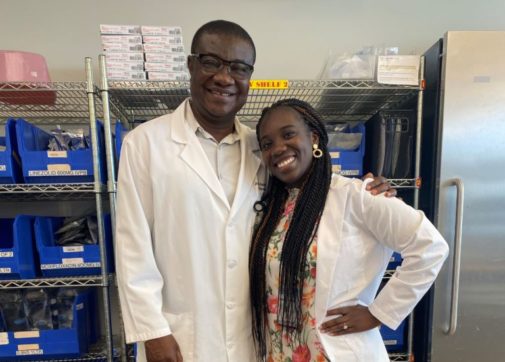 When Pharmacy Clinical Coordinator Sandra Kwarteng decided to follow in her father’s footsteps and join the Advocate Trinity Hospital pharmacy team in Chicago, she had no idea her father, Alex Kwarteng, had a life-of-the-party personality.

But after working side-by-side as pharmacists for nearly a decade, the two have developed a special bond that transcends the traditional father and daughter relationship: Sandra and Alex are also friends.

“I feel like I really, really got to know my Dad when we started working together,” Sandra Kwarteng said. “I get to see how funny he is and how quick he is with comebacks.”

In her first days working at Advocate Trinity, she said she couldn’t imagine why so many of their co-workers wanted to know if Alex talks as much at home as he does at work.

“I thought he was quiet,” Sandra Kwarteng said with a laugh.

Growing up, Sandra Kwarteng said her mother, Stella, disciplined her and her three younger sisters unless their education was involved. Those instances were when Alex became most vocal at home.

“I was stern when it came to school. Sandra, being the oldest with three sisters behind her, she had to set an example, so we were really tough on her,” Alex Kwarteng said.

He also spoke up when Sandra shared she wanted to pursue a math degree in college.

It turned out that her father knew best at other points in her journey toward a career in pharmacy. He was always available to help with her pharmacy homework and he allowed Sandra Kwarteng to shadow him at work in Advocate Trinity’s pharmacy. He also encouraged her to apply to work on the team – and that’s when their friendship soared.

“When we are here [in the pharmacy] I don’t think of her as my daughter. I say that’s my co-worker,” Alex Kwarteng said.  “It’s an honor to have a child to make accomplishments in life.”

That feeling is mutual.

“I love him very much and I’m grateful God has blessed me with him as a role model.  I’m very fortunate to be his first born and have him as a Dad,” Sandra Kwarteng said.

← What is the Mediterranean diet?
4 things to know about kidney stones →