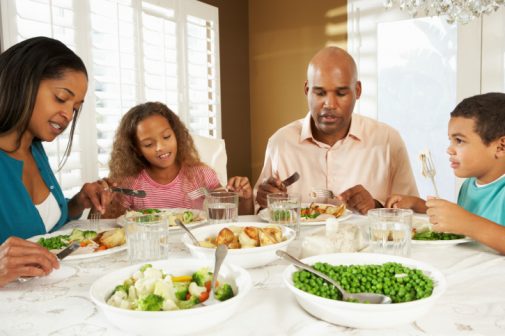 Eating a home-cooked meal and skipping your favorite dinner-time show might be the key to fighting obesity, according to one study.

Researchers at Ohio State University found that adults who reported never watching TV or videos during family meals had significantly lower odds of obesity compared to their peers who always watched something while eating. In addition, those adults whose family meals were home-cooked also had lower odds of obesity than others who ate some or no home-cooked meals, according to the study published in the Journal of the Academy of Nutrition and Dietetics.

The researchers analyzed data collected from the 2012 Ohio Medicaid Assessment Survey. More than half of the 12,800 participants said they ate with their family on most days, while 35 percent had family meals some days and 13 percent said those meals occurred only a few days per week. In addition, one-third of the study’s participants were obese, and another third watched TV (or videos) during family meals.

The study suggests that the structure of family meals may be as or more important than their frequency, said researcher Sarah Anderson of Ohio State’s College of Public Health.

Anderson and her colleagues found that adults who prepared their meals and ate without watching TV had the lowest odds of becoming obese.

“Families have a lot of demands, and they can feel pressured to do things ‘right’ all the time. This study showed potential benefits regardless of how often you eat a family meal at home,” said researcher Rachel Tumin of Ohio Colleges of Medicine government Resource Center.

“When we cook at home, we can control what we are eating by using less fat, sugar and salt. When combined with a more mindful approach to meals, it helps us to naturally eat fewer calories, which ultimately can prevent obesity,” says Dr. Mikhail.

During meals, Dr. Mikhail suggests focusing on spending time with family and friends instead of television.

“Conversation at the dinner table usually revolves around the family members’ respective days, but it also can include the food we are eating. Conversations about food, flavors, textures and tastes leads us back to enjoying our meals. When we are mindful of what we’re eating, we usually eat fewer calories,” he says.

← At what age is it safe to leave a child home alone?
This could also go down if you lose some weight →