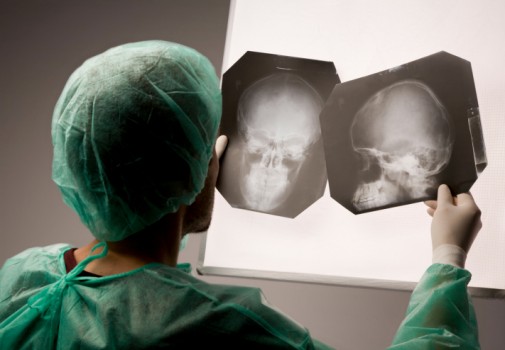 Talking with my mom the other day, I was surprised to hear that my dad had seen a neurologist to discuss recent lapses in his short-term memory.

Dad’s doctor discovered that his memory loss was likely came from the slight shrinkage of the right frontal lobe of his brain caused by a concussion, Mom said.

The concussion occurred decades ago, possibly before I was even born.

A concussion is a type of traumatic brain injury, or TBI, caused by a blow to the head or other excessive force. An injury to the brain, which may or may not lead to a loss of consciousness, can impair a person’s physical, cognitive and even emotional behaviors for days or weeks.

However, studies are raising concerns about the long-term effects of concussion and other brain injuries, even if suffered just once, says Dr. Raina Gupta, a neurologist at Advocate Illinois Masonic Medical Center.

“The long-term effects of head trauma are just now being studied. So not much is known,” Dr. Gupta says. “They very likely include changes in cognition and, yes, memory loss.”

We know much more about the short-term effects, which include headache, seizures, dizziness, insomnia, depression, irritability, double vision, changes in smell, facial pain and the loss of memory. These typically develop in the first days after mild TBI and generally stop within a few weeks or months. But any of these symptoms can persist longer.

“If you sustained a head injury years ago and are having persistent issues with your cognitive function, such as feeling foggy or slowed down, difficulty concentrating, memory loss or confusion, you should definitely talk to your doctor,” Dr. Gupta says.

“Also be sure to discuss any changes in mood or sleep, and difficulties with language, attention and processing information,” she adds. “Long-term effects of head injury may lead to partial or total disability that may prevent a person’s functional and psychosocial recovery.”

Though it may be difficult to definitively connect such symptoms to a head injury from many years before, physicians are certain such injuries can cause changes in the brain, even at the cellular level. But Dr. Gupta cautions that it will take more research to fully understand these effects on the brain.

To avoid long-term effects, anyone suffering a head injury should be immediately evaluated by a physician.  After any head injury, you should take your time to recover, slowly increasing physical activity and exercise, as symptoms allow, under the supervision of your doctor. During your recovery, avoid undue strain to the brain until your learning processes have fully recovered. Seeking treatment for mood and sleep disturbances also may be beneficial to your recovery.

“Anyone experiencing any or all of these cognitive symptoms, even years after a blow to the head or concussion, should seek medical attention and, if appropriate, further evaluation,” Dr. Gupta says. “It’s always better to be safe. And there are ways we can help.”

I will definitely be passing this advice on to my dad.