Can the flu shot lower your risk of heart problems? 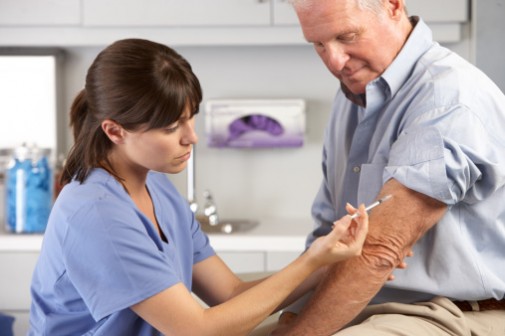 If fear of the flu isn’t reason enough for you to get a flu shot, maybe avoiding a heart attack is. Researchers from Toronto claim that for certain age groups, getting the flu vaccine may also come with the added benefit of warding off cardiovascular disease.

According to a study published in the Journal of the American Medical Association, the use of influenza vaccine was associated with a lower risk of major adverse cardiovascular events—2.9 percent among those who received the vaccine vs. 4.9 percent among those who did not. The average age of the participants in the study was 67 and the greatest treatment effect was seen among the highest-risk patients with more active coronary disease.

“This study re-emphasizes the importance of the flu vaccine for many groups,” says Dr. Jennifer DeBruler, an internal medicine physician with Advocate Medical Group. “If individuals with heart conditions can receive extra benefits from the flu shot, that’s a positive. We still recommend the vaccine annually for most people.”

The Centers for Disease Control and Prevention (CDC) recommends that all persons aged 6 months and older be vaccinated annually, with rare exceptions. In addition, the CDC says it’s especially important for certain groups to be vaccinated, including:

Live in the Chicago area? If so you can join Advocate Medical Group as they team up with Dr. Mehmet Oz, famed host of the Dr. Oz show, and Fox 32 to give away 1,000 free flu shots on Tuesday, October 29. Together they are helping to raise awareness about the importance of getting your flu shots. Click here to register.

← Long-term effects of child spankings
Cancer 101: What you need to know →