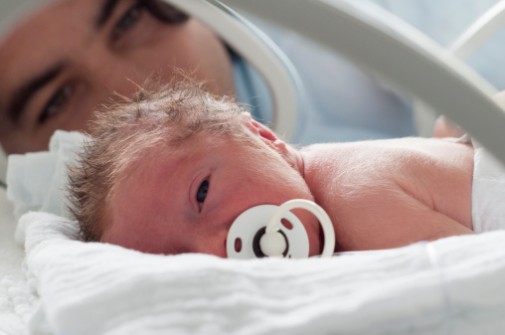 For many premature babies learning to eat can be challenging because they often don’t have the necessary strength and coordination. As a result, a feeding tube is needed to provide nutrition. However new research has found that preemies may eat sooner on their own when they hear the sound of their mother’s voice. In many cases, this means these babies can leave the hospital sooner.

Researchers at Vanderbilt Children’s Hospital studied a group of 100 premature infants who were born between 34 and 36 weeks gestation and were relying on a feeding tube for nutrition. Half of the babies sucked on a special pacifier five times a day that played a recording of their mom singing. When it was time for feeding, these babies ate 2 milliliters of fortified breast milk compared to less than 1 milliliter for the babies who did not have the special pacifiers.

Infants who heard the recording were able to eat more than six times a day without a feeding tube compared to just four times a day for the other babies. They also ate almost twice as much as the other babies when they were feeding. The bottle feedings were complimented by tube feedings to ensure that the babies were receiving enough nutrition.

This is not the first study to prove the power of a mother’s voice. In fact, other research has also shown just how much of an impact a mother can have on such a tiny baby.

“Human infants, even when premature, prefer their own mother’s voice, face and body smell. Research studies have shown that preemie babies turn to their mother’s voice over other female voices and look toward the direction from which the voice is coming even when the mother is few feet away,” said Dr. Vibhaben Thaker, neonatologist at Advocate Good Samaritan Hospital in Downers Grove, Ill.

This study offers insight into a new way for parents to help get their premature baby home sooner, but there are many other things parents can do.

“I encourage parents to have skin-to-skin contact with their infant, along with using pacifiers to aid in teaching infants to suck effectively for breastfeeding or bottle feeding,” said Carol Sue Borkowski, a lactation consultant at Advocate Good Samaritan. “I also recommend parents talk, sing, and touch their infants to intensify the bonding process along with promoting effective suckling for breastfeeding or bottle feeding.”