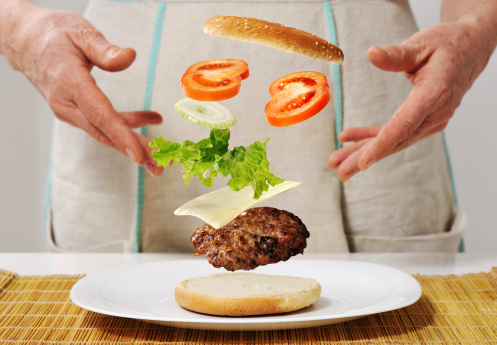 Are you over age 50? You don’t have to tell us, but if you are, new research suggests you consider opting for a salad for lunch instead of a burger. The study, published in the journal Cell Metabolism, may make you want to cut back on eating animal protein.

The study, done at the University of Southern California and led by Professor Valter Longo, showed that high animal protein intake in the middle-age years had a high probability of causing cancer, diabetes and, in some cases, death. These harmful effects were lessened greatly when middle-aged adults consumed their protein from plant matter.

While eating a high protein diet may boost weight loss in the short term, researchers said it can shorten your lifespan in the long run. A second study, from Australia, found that the diet providing the longest lifespan was one low in protein and high in carbohydrates.

Professor Longo’s research led him to a startling conclusion. “We studied simple organisms, mice and humans, and provide convincing evidence that a high-protein diet – particularly if the proteins are derived from animals – is nearly as bad as smoking for your health,” he said in a statement.

A high protein diet among adults is considered when a diet contains 20 percent of daily calories from protein. In the study, Longo and his colleagues found that adults age 50 or above who consumed moderate amounts of animal protein had tripled their likelihood of dying from cancer. They also found that these effects were greatly lessened or even became non-existent when people ate a mainly plant based diet.

Researchers attribute the harmful effects of animal protein to the growth hormone within meat. This causes cancer and lessens cells’ ability to protect themselves.

The study also showed, however, that people above age 65 actually benefitted from animal protein intake. The subjects in the study who were above 65 showed a 60 percent reduced risk of dying from cancer.

← Is there such a thing as too much healthy eating?
Sleep apnea linked to pneumonia risk →