One binge drinking session could cause permanent harm 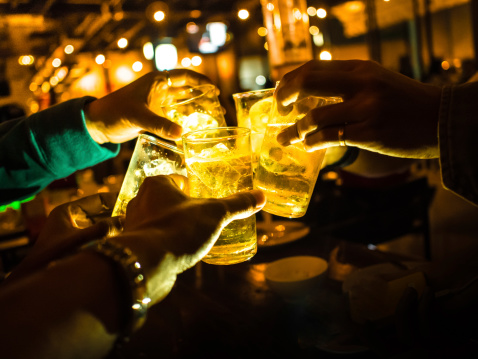 According to a new study, even a single episode of binge drinking can have serious negative health consequences. Researchers found that one binge drinking session results in bacteria leaking from the gut, which leads to higher levels of toxins within the blood. These bacterial toxins—endotoxins—force the body to produce immune cells that are involved in fever, tissue destruction and inflammation.

The Centers for Disease Control and Prevention (CDC) has defined binge drinking as a pattern of drinking that “brings a person’s blood alcohol concentration (BAC) to 0.08 grams percent or above. This typically happens when men consume 5 or more drinks, and when women consume 4 or more drinks, in about 2 hours.”

Further, estimates show that more than 38 million U.S. adults binge drink, about 4 times a month, and the largest number of drinks per binge is on average 8. This behavior greatly increases the chances of getting hurt or hurting others due to car crashes, violence, and suicide. Drinking too much, including binge drinking, causes 80,000 deaths in the U.S. each year.

“Binge drinking takes a tremendous toll on your body,” says Dr. Adam Rubinstein, an internal medicine physician with Advocate Condell Medical Center in Libertyville, Illinois. “Over time, binge drinking raises blood pressure and can significantly damage your liver. I typically tell patients that if they are going to drink at all, I’d rather they have one glass of wine with dinner each night rather than four or five glasses of wine in one sitting one time a week because of the negative impact of that kind of binge drinking.”

The CDC defines a single alcoholic drink as any drink that contains 0.6 ounces (14.0 grams or 1.2 tablespoons) of pure alcohol. Generally, this amount of pure alcohol is found in:

Dr. Rubinstein adds, “You should always disclose to your physician how much alcohol you consume. If you have any underlying conditions or are taking certain medications, alcohol consumption may have a negative impact them.”

← How much dye is really in kids’ food?
Community medicine’s “front line” →