Are moms starting infants too early on solid foods? 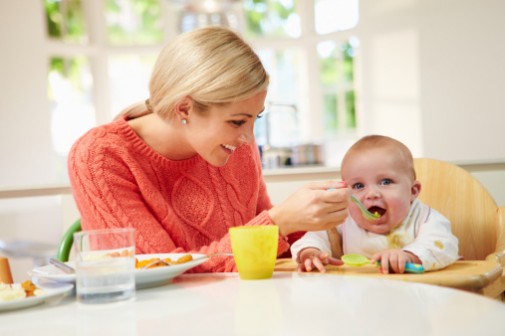 The Centers for Disease Control and Prevention (CDC) recommend breast milk alone to be sufficient for infants in the first six months of life. The American Academy of Pediatrics (AAP) supports this notion with a report stating that nutrients such as water, juice and other foods are generally not needed during this time.

So why did a study published the journal Pediatrics report that many mothers introduced solid food before children reached the four-month mark? According to the study results, moms had a variety of reasons for offering solids earlier than recommended.

Study participants included 1,334 mothers who answered monthly questionnaires about their child’s eating habits within the last week. Overall, 40.4 percent of moms introduced solid foods such as purees and cereal before 4 months. More than half or 52.7 percent of moms had formula-fed infants that were given food before 4 months, and the lowest percentage of moms doing the same came from those with breastfed infants.

Although moms may have their reasons, the recommendations for the six-month mark are in place with the best interests of the child’s health in mind. “There are a lot of studies that say early feeding is linked to an increase risk of diabetes,” says Dr. David Farnsworth, an Advocate Medical Group pediatrician with offices in Chicago.

Another consideration is the infant simply may not be ready. “Kids can tend to overeat because they don’t have that mechanism to shut down with solid food,” explains Dr. Farnsworth.

Every pediatrician practices differently so in terms of their recommendations, often times it comes down to the infant’s development. Usually a child is seen at the four-month marker anyway, so “some pediatricians are OK with introducing solid foods between four and six months,” says Dr. Parav Patel, a pediatric hospitalist at Advocate Illinois Masonic Medical Center in Chicago. “But it depends on many factors such as whether the infant can support his own head.”

Dr. Farnsworth says that at the two-month visit, he talks with parents and recommends they hold off discussing solid foods until the four-month visit. “I warn parents about giving their infants solids. If I show them their child’s weight gain is normal and then talk to them about the concerns related to diabetes and overeating, that tends to help.”

He also encourages parents to not get overly concerned with solid foods. “I tell them, ‘Sometimes kids get hungry every two hours. That’s OK. They know what they need,’” he says.