Try pistachios to boost your health 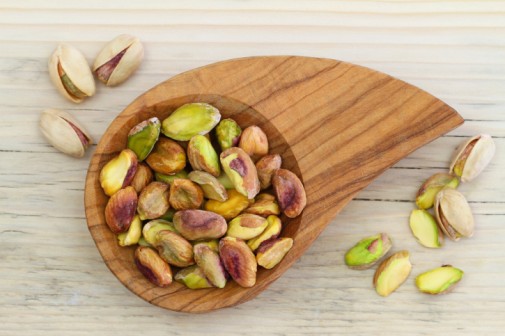 We’ve all heard the benefits of eating nuts and how it’s a great, healthy snack when you need a protein-boost or are on-the-go. Now a recent Spanish study takes a look at the effects of pistachio consumption on Type 2 diabetes prevention.

For those who have been diagnosed in the pre-diabetes stages, according to the Centers for Disease Control and Prevention, the likelihood of developing diabetes goes up 15 to 30 percent if no preventative action is taken.

Researchers split a group of 54 people who fell in the pre-diabetes category, and were both told to eat a balanced diet with certain percentages of carbs, fat and protein. One of the groups was asked to consume two ounces of pistachios each day rather than other fats for the second group.

Results showed substantial decreases in blood sugar and insulin levels, and for some inflammation also went down. The second group who did not add pistachios in their diet had the opposite effect with numbers and their conditions worsening.

Rosemary Mueller, registered dietitian with the Advocate Weight Management program at Advocate Condell Medical Center in Libertyville, Ill., says that although this is a small sample size, this study adds to a lot of research we have already seen on the health benefits of pistachios and nuts.

“In this study and many others, some things are clear:  Eating small amounts of nuts, including pistachios, regularly seems to improve critical factors in the prevention of diabetes,” Mueller says.

“Pistachios offer the richest source of phytosterols (plant sterols with a similar structure to cholesterol) among tree nuts,” she says. “It is believed that these components lower the absorption of dietary cholesterol from other foods.”

She says that if you need to watch your sodium intake, to go for the unsalted kind.

Mueller recommends the following tips to mix things up:

“The key is portion control. Nuts are a wonderful source of nutrition, but they are neither low in fat nor calories – so be mindful of the quantity consumed,” she says. “I highly recommend measuring out a designated portion or relying on a small handful per day vs. “eating mindlessly” out of a bag.”

The study was led by researchers at the Universitari Hospital of Sant Joan de Reus and the Instituto de Salud Carlos III in Madrid, with the research being funded by the American Pistachio Growers and Paramount Farms.

← Do you know your daily calorie budget?
Diet high in saturated fat may link to Alzheimer’s →