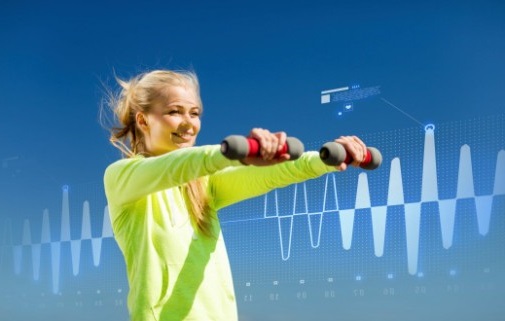 You’ve seen them everywhere – little black wristbands or belt clips with names like Jawbone, Basis or FitBit. These little bits of wearable technology are activity trackers, devices designed to allow users to track everything about their bodies, from step counts to body weight or even sleep patterns.

For many, even kids, fitness trackers have become a part of everyday life, and, according to Advocate health navigator Tamara Stephens, with Advocate Health Care in Downers Grove, Ill., devices such as the FitBit coupled with their own tracking apps are allowing people to take control of their health in ways that were never possible before.

“Fitness trackers are an easy way to keep people accountable, set a custom goal and stay connected with other friends and family that also have health and fitness goals,” Stephens says. “We live in a world of technology where it is a necessity to have a quick and simple way to do things. Fitness trackers provide just that without the need to go to a gym or meet with a trainer.”

The presence of wearables that Stephens has noticed is not just an isolated thing either. According to a study from Pew Research, 21 percent of adults responded that they use some form of technology to track at least one aspect of their health, often turning to activity trackers or smartwatches. The positive feedback, Stephens says, only enhances the experience.

“Fitness trackers are the new fad but also a great way to set a goal and hold yourself accountable,” Stephens says. “There is that sense of accomplishment you get hitting that 10,000th step, and your fitness tracker beeping to let you know that you have reached your goal.”

The activity tracker industry has exploded over the past five years, with everything from watches to bands to special smartphone cases, all allowing users to monitor their bodies in new ways. Trackers have become so popular in fact that some of the world’s largest technology companies have begun to take notice. Earlier this year, Google introduced fitness tracking into its Android Wear platform, and on Sept. 9, 2014, Apple unveiled its own smartwatch, a device that will include its own sophisticated fitness tracking technology.

Some studies have shown, however, that activity trackers are spreading faster than their technology can keep up. Research published last month by Iowa State University professor Gregory Well revealed that accuracy in counting steps taken and calories burned varied widely from tracker to tracker, with the best tested device supplying wrong information 9.3 percent of the time and the worst 23.5 percent of the time.

Regardless of the inaccuracies, Stephens still sees fitness trackers as a positive way to get people up and moving, counting and even having fun.

“Fitness trackers are great for those who are able to provide themselves with a little motivation of their own,” Stephens says.  “Some people just don’t need a one-on-one interaction with a trainer or a class to keep them motivated. They definitely are a great step in the right direction.”