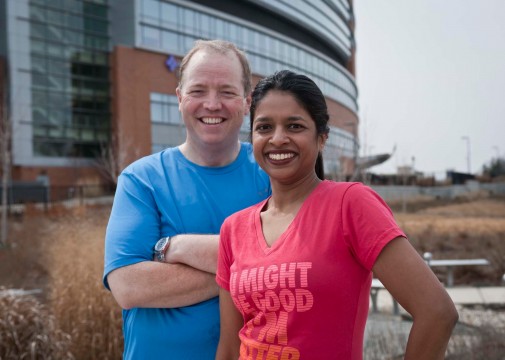 After 18 months of diet and exercise, Mabel Smith and Tim Warren have collectively lost 110 pounds. Now, the co-workers at Advocate Lutheran General Hospital in Park Ridge have their sights set on the finish line at this Sunday’s Bank of America Chicago Marathon.

What began as an effort to lose weight and get in shape has the pair embracing a running lifestyle. This will be their first marathon and they’ll be raising funds for the South Asian Cardiovascular Center at Advocate Lutheran General.

“I have so much more energy now and feel fabulous,” says Smith. “I never imagined becoming a runner, but now I’m hooked.”

Smith said she was motivated to get active because of her dad’s health problems. “My father has a history of heart issues and I wanted to do everything I could to get in shape,” said the 44-year-old mother of three kids. “This is something that runs in our family and affects South Asians particularly hard.”

Warren, 47, says his regular check-ups and Advocate’s employee fitness program got him going in the right direction. “My doctor really encouraged me to get moving and to lose weight,” he said. “I took the advice to heart.”

Finding the time to train for the 26.2 mile endurance event has been difficult but Warren said it’s been worth the effort. “We’ve been fighting to keep on schedule,” he says. “And we understand the importance of staying on track to finish well and avoid injury.”

Planning to run side-by-side, Smith and Warren are hoping to finish the race in five hours. The pair has run numerous races to prepare for the big one.

“Including Chicago, we will have completed 13 races including seven half marathons in 2013,” Smith said. “We really encourage everyone we know to take steps to get fit. It’s been a great journey.”

← Should doctors focus more on preventing heart disease?
My feelings don’t consume me →