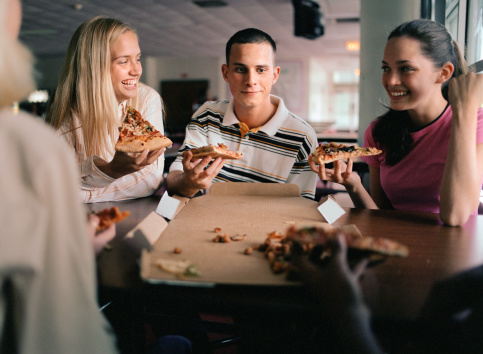 Nearly everyone has heard about the dreaded “freshman 15.”

It refers to the amount of weight freshman students reportedly gain in their first year of college. But is it just urban legend or reality?

“Most college students do gain weight,” says Dr. Sandra McGowan, a family practice physician with Advocate Medical Group in South Holland, Ill. “But it’s a gradual weight gain, usually not fifteen pounds all at once. Because your family only sees you a few times a year, when you come back home with a bit of extra weight it can seem sudden and excessive.”

The research seems to agree. A nationwide study released in 2011 in the journal Social Science Quarterly found that on average, freshman really only gain between 2.5 to 3.5 pounds in their frosh year. From then on, they continue to gradually gain weight while in school and even after, but at a moderate and steady rate.

Dr. McGowan says the difference between freshman year and the years after is a matter of time and experience.

“As a freshman, you may be a little lonely, homesick or suffer from separation anxiety, so you eat to compensate,” she says. “As a sophomore and upperclassman, you’ve been away from home now for a while so you’re used to it and you are more conscious of your behavior by this time.”

That doesn’t mean college students are off the hook just yet, she says. College offers a number of temptations including alcohol, and of course the “dining hall diet”—endless portions of high-fat and high-calorie meals like french fries and ice cream, liters of soda and salty and sugary snacks during late-night study sessions.

How to battle the bulge

“It’s a huge change. There’s a lot of stress, freedom from parent supervision and it leads to poor choices in foods,” she says.

Lack of sleep because of studying and more time partying compounds the problem, O’Shea adds.

She suggests the following five ways to keep the so-called “freshman 15” at bay:

O’Shea suggests you stock your room with healthy snacks like:

Although Dr. McGowan recognizes that the freshman 15 is not entirely accurate, she does still warn her patients about it in hopes that healthy habits die hard and the earlier you start practicing them, the better.

She recommends that her college-age patients participate in regular exercise, choose healthier options from the dining hall menu, cut back on junk foods and fast foods as much as possible and snack on fruits and veggies while studying.

“It’s important to eat healthy and exercise when you’re this age because being overweight can lead to obesity, diabetes, hypertension and high cholesterol in the future,” she says.

← September: A dangerous month for young pedestrians
Infographic: How to stop your child’s nosebleed →