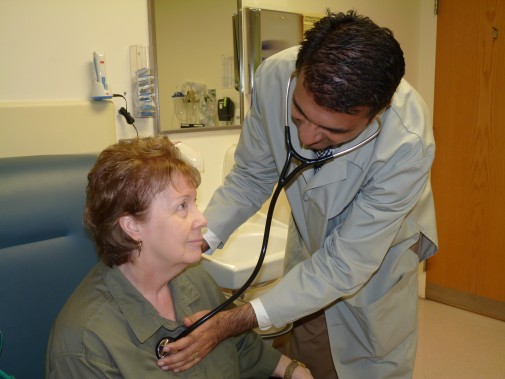 For the past 20 years, Mary Ann Miska has been scheduling tests and procedures at Advocate Lutheran General Hospital in Park Ridge, Ill. Last year, she took a closer look at the hospital’s preventative services and made an appointment to take a cardiac calcium scoring test.

A cardiac calcium scoring test uses a CT scan to check for buildup of calcium in plaque on the walls of the arteries of the heart. The more calcification there is, the higher the risk for a future heart attack. In Miska’s case, it showed that blockage was present.

The test is used to check for heart disease at an early stage and to determine how severe it is, says Dr. Shoeb Sitafalwalla, cardiologist with the Advocate Heart Institute at Lutheran General Hospital in Park Ridge, Ill.

“The test lets us know that there is plaque buildup in the coronary arteries, but it does not tell us how severe the blockage is,” he says.

Because of the findings, additional testing, including a stress test, was performed.

Miska, who had led a sedentary life, received some bad news.

“I remember I could not endure four minutes on the treadmill,” she said. “My legs felt like lead.”

This was followed by an angiogram, which led to a stent placement in her right coronary artery due to a 99-percent blockage at the opening of her artery.

After surgery, Miska began cardiac rehabilitation, changed her nutrition and joined a fitness center. She said she lost 35 pounds and several dress sizes.

“I feel better than ever and moving forward,” Miska says. “The test is the best you can take to see if there’s a problem and catch it early.”

The calcium scoring test is simple and can be administered in 10 minutes. Dr. Sitafalwalla recommends that men and women over 45 who have a family history of heart disease talk to their doctors about taking the test.

“Let’s not wait for a heart attack to happen,” Dr. Sitafawalla says. “Let’s prevent it.”