This is why pancreatic cancer can be so difficult 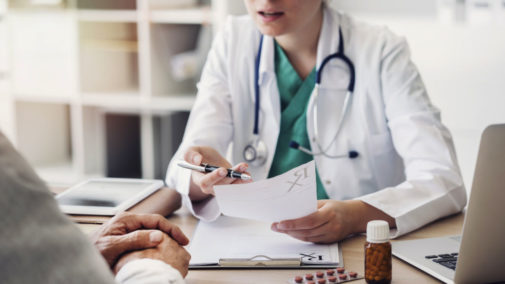 When quiz show legend Alex Trebek died in 2020, it saddened fans who welcomed the “Jeopardy!” host into their homes weekday afternoons for decades.

Jeopardy! is saddened to share that Alex Trebek passed away peacefully at home early this morning, surrounded by family and friends. Thank you, Alex. pic.twitter.com/Yk2a90CHIM

Trebek’s death came less than two years after he went public with his pancreatic cancer diagnosis. He updated fans about his cancer frequently, giving them an idea of what he was going through.

“There were moments of great pain. Days when certain bodily functions no longer functioned. And sudden massive attacks of great depression that made me wonder if it really was worth fighting on,” Trebek said in a video posted online a year after his diagnosis. “But I brushed that aside quickly because that would have been a massive betrayal. A betrayal of my wife and soulmate Jean, who has given her all to help me survive. It would have been a betrayal of other cancer patients who have looked to me for inspiration and a cheerleader of sorts.”

A one-year update from Alex: pic.twitter.com/W9101suZeZ

According to the National Cancer Institute, 56,770 new cases of pancreatic cancer were diagnosed in 2019, but only 9.3% of people will survive five years after they are diagnosed.

Dr. Chevinsky: Pancreatic cancer is so deadly because the location of the pancreas makes growth of the tumor inapparent until it becomes large.

Dr. Dallas: The only patients that have long term survival when treated for pancreatic cancer are those that are able to have it removed. Unfortunately, that is less than 15% of patients.

Dr. Dallas: It often grows without causing symptoms. When symptoms do show up such as pain or jaundice, it is usually too late to treat the patient effectively.

Dr. Chevinsky: The pancreas sits behind the stomach, and tumors of the body and tail of the pancreas can grow quite large before they are discovered.  Symptoms include vague abdominal and back pain, loss of appetite, weight loss and fatigue.  Tumors in the head of the pancreas can manifest jaundice (yellowing of the skin and eyes) due to obstruction of the bile duct as it passes through the pancreas to get to the duodenum.  Pancreas cancer tends to spread early to the lymph nodes and liver.

Dr. Dallas: The key to helping patients with pancreatic cancer live longer is two-fold. One is to find and diagnose patients earlier. Only about 10% of patients with pancreatic cancer have a genetic or familial component to their disease. Genes such as BRCA2, ATM have been identified in addition to hereditary conditions that cause chronic pancreatitis. The majority of patients are diagnosed without this history, however, making it hard to identify a patient population that would benefit from screening.

Dr. Chevinsky: Pancreas transplants can be done for patients with diabetes and kidney failure, but are not done for pancreas cancers. If cancer is confined to the pancreas, we have the patient presented in a multidisciplinary cancer conference.  If the tumor is deemed, “resectable”, then the patient goes on to receive chemotherapy and/or radiation therapy and then surgical resection.  If metastatic, then the patient is treated with chemotherapy, and, often presented at our precision medicine conference to look for mutations and other areas of the tumor to target.

It’s important to listen to your body and maintain a healthy lifestyle.  Pancreas cancer is on the rise, and with limited symptoms and signs, it’s crucial to speak to your physician about any concerns as early as you identify them.

“If we take it one day at a time with a positive attitude, anything is possible,” Trebek said in his video.

Are you looking for a doctor? Find one in Illinois. Or find one in Wisconsin.