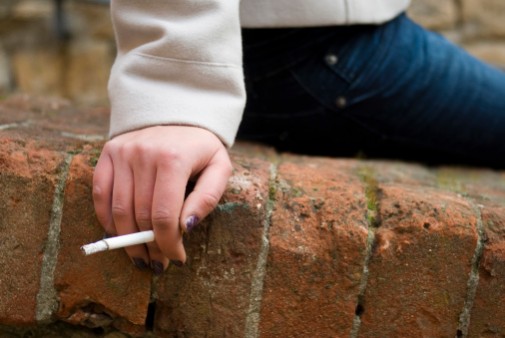 The chance of a woman having breast cancer during her life is about 1 in 8, according to the American Cancer Society. But if you’re a smoker, your odds may be higher.

According to a new study in the journal Cancer, young women who smoke are more likely to develop a common type of breast cancer known as “estrogen-receptor positive.”

Researchers recruited women between the ages of 22 and 44, who had been diagnosed with breast cancer between 2004 and 2010. Of those women, 778 were diagnosed with the more common estrogen receptor-positive type and 182 had the less common (but more aggressive) “triple-negative” type. Information from 938 cancer-free women was also included for comparison.

After analyzing the data, the researchers found that young women who had smoked – more than 100 cigarettes in their lifetime – were approximately 30 percent more likely to develop any type of breast cancer, compared to those who had never smoked.

However, there was no link found between smoking and the less common triple-negative breast cancer. The researchers hypothesize that some of the substances found in cigarettes act like estrogens, which would promote estrogen receptor-positive breast cancer.

“We know smoking is associated with many types of cancer,” says Dr. Anna Katz, a breast surgeon at Advocate Condell Medical Center in Libertyville, Ill. “With some new evidence also linking it to breast cancer, the best thing you can do is quit, or never start, to lower your cancer risk.”

Additionally, Dr. Katz suggests focusing on other factors you can control, such as exercising regularly, eating a healthy diet and watching your alcohol consumption.

← Can a Mediterranean diet make you smarter?
Can you prevent heart disease? →