Health care heroes: Taking back to give back 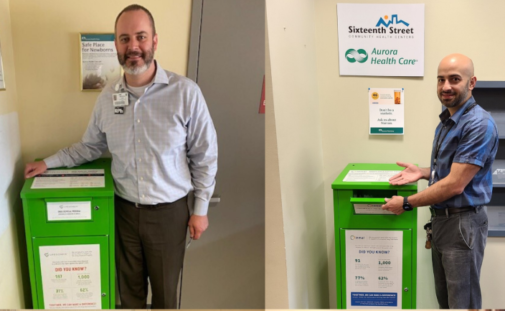 The opioid abuse crisis is a complicated problem, but stopping young people from getting hooked can go a long way to helping solve it.

Sometimes, people will find a parent or grandparent’s leftover prescription drugs in a cabinet or drawer and start down a path to addiction that way.

It was with that in mind that Nick Ladell put a plan into action. Working with other hospital leaders, the Director of Pharmacy Services at Aurora West Allis Medical Center worked to install three drug takeback bins, one at his hospital and two others in at Advocate Aurora Health hospitals in the Milwaukee area.

The locked boxes are a safe place for people to put the medicine they don’t need anymore, and the state of Wisconsin hosts a website that shows where all the boxes in the area can be found.

After the drugs are dropped off, they’re disposed of safely. The idea is simple: If there are no prescription drugs at home, it’s harder for people who intend to take them improperly to get them.

“I want to be part of the solution,” Ladell says.

And the drug takeback program also helps with cleanliness of the Great Lakes.

“Drugs that end up in landfills or away or flushed down the toilet end up in our waterways,” Ladell says. “This way, traces of these medicines don’t end up in our drinking water.”

That’s why Ladell and his team received a Live Green, Live Well Award from Advocate Aurora Health this year. The awards recognize team members who are working hard to create healthier people and a cleaner Earth.

Learn more about all the winners here.